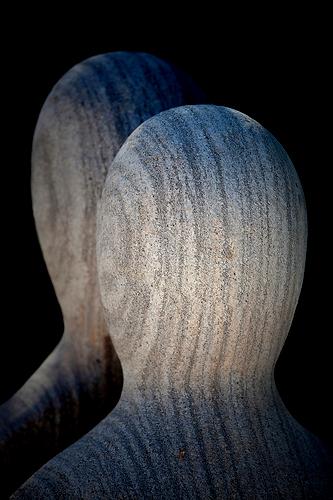 Monday’s Poem: ‘The Birth of God,’ by Daniel Brown
It happened near LascauxMillions of dawns ago.
For dawn it was,Infusing radianceAnd cuing aviansThe way it does, That saw the two of them(Odds are a her and him,Though maybe not)Emerging from the mouthOf a cave a couple south All that painted faunaAll but snorting on aWall. That isTo say, from the mouth of a caveUnconsecrated saveBy the sighs and cries Of the night just past. The pairHas borne the bliss they shareOut into the bright.
Where silently they standThanking, hand in handBefore the light.
Their gratitude is trulyNew beneath the dulyErupting sun.
A gratitude that soWants a place to goIt authors one.
by Daniel Brown. Reprinted from Taking the Occasion by permission of Ivan R. Dee publishers and the author.
Daniel Brown won the New Criterion Poetry Prize for his collection Taking the Occasion (2008) and his poems have appeared in Poetry,
Partisan Review, The New Criterion, and elsewhere. He holds a masters degree in musicology from Cornell University, and has taught
music history and theory at Cornell and Dartmouth College.
Arts & Academe‘s poetry editor, Lisa Russ Spaar, notes: Werner Herzog’s captivating and oneiric documentary Cave of Forgotten
Dreams, released in the states just a couple of months ago, is stirring renewed (3D!) interest in prehistoric cave paintings, their makers,
and the origins of all art. The Cave of Chauvet-Pont-d’Arc that is the subject of Herzog’s film is thought to contain the oldest paintings in
the world, “some fifteen to eighteen thousand years older than the friezes at Lascaux and at Altamira,” according to the New York Times.
These early artists, working in charcoal, red pigment, and other media, etched or painted (during the Old Stone Age—between 37,000 and
11,000 years ago) with impressive power, élan, and artistic sophistication the walls and other rock formations in a network of caves located
primarily in southern France and northern Spain.
In an essay published in The New Yorker on June 23, 2008, a piece Herzog cites as a chief inspiration for his own project, author JudithThurman relays that Picasso, after a visit to Lascaux, said to his guide, “they’ve invented everything.” Just what these early humansinvented, however, has inspired a wide range of interpretations. As Thurman puts it, “The question of who ‘they’ were speaks to a mysterythat thinking people of every epoch and place have tried to fathom: Who are we? In the century since the modern study of caves began,specialists from at least half a dozen disciplines—archeology, ethnology, ethology, genetics, anthropology, and art history—have tried (andcompeted) to understand the culture that produced them. The experts tend to fall into two camps: those who can’t resist advancing atheory about the art, and those who believe that there isn’t, and never will be, enough evidence to support one.” Daniel Brown’s “The Birth of God” steps into the arena of the debates surrounding how we might interpret or imagine the behaviors andintentions of prehistoric peoples, although his focus is on the origins of god rather than on the beginnings of art (a distinction that Brown’spoem finally demonstrates to be blurred in provocative ways).
In characteristically formal stanzas (five six-line strophes rhyming aabccb in a playful mix of primarily three- and two-stress lines ofiambic and dactylic feet), Brown commences in a story-telling, almost rollicking mode (“It happened near Lascaux / Millions of dawnsago”) whose sportive rhythms, vernacular diction, and clever rhymes (Lascaux/ago, for instance, and radiance /avians—and, later, thesublime fauna/on a) are a hint to the reader that despite the profundity suggested by the title’s heavy topic, the speaker is going to suffusehis treatment of the subject with humor, sexiness, and even irony.
Clearly the writer of this enjambed sentence For dawn it was,Infusing radianceAnd cuing aviansThe way it does, That saw the two of them(Odds are a her and him,Though maybe not)Emerging from the mouth

Of a cave a couple southOf the one that’s got All that painted faunaAll but snorting on aWall does not mean the reader to take as historical fact the tableaux he presents. Yet when his prehistoric couple emerges from the cave’s mouthin post-coital bliss, “hand in hand / Before the light,” are we meant merely to picture some anachronistic version of Fred and Wilma in aCialis commercial? The last stanza suggests that more is going on here than a light-hearted “there once was a couple from Lascaux”retelling of what is, after all, not a new story to ancient and modern philosophers, poets, and theologians: the invention of god out of humanterror, need, gratitude, awe, wonder.
Their gratitude is trulyNew beneath the dulyErupting sun.
A gratitude that soWants a place to goIt authors one.
Here the rhymes become stately, and as though coming out of a dark cave, the reader, too, blinks with a kind of gratitude at all of thesudden light flooding in, any irony or facetiousness dispelled by the sheer fact of the world going on (“duly / Erupting”) with its own musicand force despite humans and their mortal making – art, love, meaning. With the poem’s penultimate rhyme sound, the long “o” (oh!) ofso/go, we are returned to the rhymes that open the poem, and awe-struck exclamation trumps clever word play.
Finally, the formal engine of this poem, with its comic surfaces, is integral to Brown’s overall vision. His interior subject—“a gratitude thatso / Wants a place to go / It authors one”—is made all the more powerful for its detonation in this lighter context. Do we make because wewere made? Or do we make as a way to explain what might seem to some to be our own meaningless being made? Do we invent what weneed? Maybe yes, maybe no. But if we closely “observe the score” (as Denise Levertov admonishes we should in an essay on the line) ofBrown’s poem, we sense a vision of human experience that is comic in a Shakespearean sense—ironic, even dark, but also shot throughwith unexpected illuminations and redemptive forces, not the least of which is the profound gift of authoring and being authored.
(Photo adjusted from original by Flickr user Keith Williamson) This entry was posted in Uncategorized. Bookmark the permalink.
Comments
Powered by DISQUS
Add a comment
Log in to post
with your Chronicle account:
Don't have an account? Create one now.
Or log in using one of these alternatives: Showing 1 comment