Fig. 1 An example of a sequence in which the target (T1 on a blue
On the day before the experiment, participants were presented background) is embedded in semantically related distractors. The with an example of a picture on a blue background, the same pic- ture on a grey background and the globe on a sheet of paper. Par-ticipants were then shown the whole set of pictures on paper andasked to name each picture. This test was designed to ensure thatall pictures could be identified and given the same name. Follow- 0.038 mg/kg group and a diazepam 0.3 mg/kg group. The diaz- ing the identification task participants were given 20 trials as prac- epam and lorazepam doses were equally sedative. Drugs were ad- ministered orally using a double-blind procedure. In order to eval-uate the effects of each drug at its peak plasma concentration,which is usually attained within 60 min after oral administration for diazepam and within 120 min for lorazepam (Mandelli et al.
1978; Greenblatt et al. 1993), a double-placebo procedure was used. Subjects in the diazepam group received placebo at One subject was discarded in the placebo-treated group 7.30 a.m. and diazepam at 8.30 a.m.; subjects in the lorazepam because of a high false alarm rate on the probe (above group received lorazepam at 7.30 a.m. and placebo at 8.30 a.m.; 50%). The percentage of false alarms on the probe was subjects in the placebo group received placebo at both times. Twosubjects were tested per day, the first one starting at 9.00 a.m., the higher in benzodiazepine-treated subjects than in the pla- cebo group (diazepam: 8.3%, lorazepam: 7.1%, placebo: A fixation dot was displayed centrally for 500 ms and followed 4.3%) but the difference did not reach statistical signifi- by a sequence of 15 pictures which were centrally displayed. Each picture in the sequence was displayed for 50 ms separated by a 17-ms blank interval. Each picture appeared on a grey background Figure 2 shows the mean percentage of trials in which except one (the target, T1) which appeared on a blue background.
the probe was detected correctly for each treatment T1 appeared randomly at positions 2, 3 or 4 in the sequence. The group as a function of the serial position of the probe rel- probe T2 (the globe) appeared randomly at positions 2 (134 ms), ative to the target. An ANOVA (using SYSTAT 6.0) was 4 (251 ms), 6 (385 ms), 8 (519 ms) or 10 (653 ms) after T1. A conducted. The between-subject factor was the group de- mask composed of randomly distributed colored rectangles waspresented at the end of each sequence. The target and the distrac- termined by the treatment (placebo, diazepam, loraze- tors were semantically related. An example of a sequence is dis- pam). The within-subject factors were the task condition (dual-task versus single-task) and the serial position of Performance was compared in two conditions: a dual-task was the probe relative to the target (2, 4, 6, 8, 10).
used as the experimental condition. Participants were asked (1) toidentify the single picture displayed on a blue background, and (2)to detect the presence of a globe. In the control single-task condi-tion, participants were asked to detect the presence of a globe and to ignore the picture on a blue background. Participants were pre-sented with 240 sequences in each condition: 120 sequences con-tained a globe. There were 24 trials for each position of T2 (2, 4, A significant main effect of group was found [F(2,50)= 6, 8 and 10). Responses were given verbally. The name of the pic- 4.79, P<0.012]. Accuracy in probe detection was higher ture on a blue background and the detected presence/absence of a in the placebo group than in the benzodiazepine groups globe, were typed by the experimenter on the keyboard of the (see Fig. 2). There was also a significant main effect computer at the end of each sequence. Participants were instructed of task condition [F(1,50)=158, P<0.001]: accuracy was to give the exact name of the target picture and to respond “noth-ing” if they did not identify the picture. All subjects started with higher in the single-task than in the dual-task condition.
The main effect of probe serial position was also signifi- 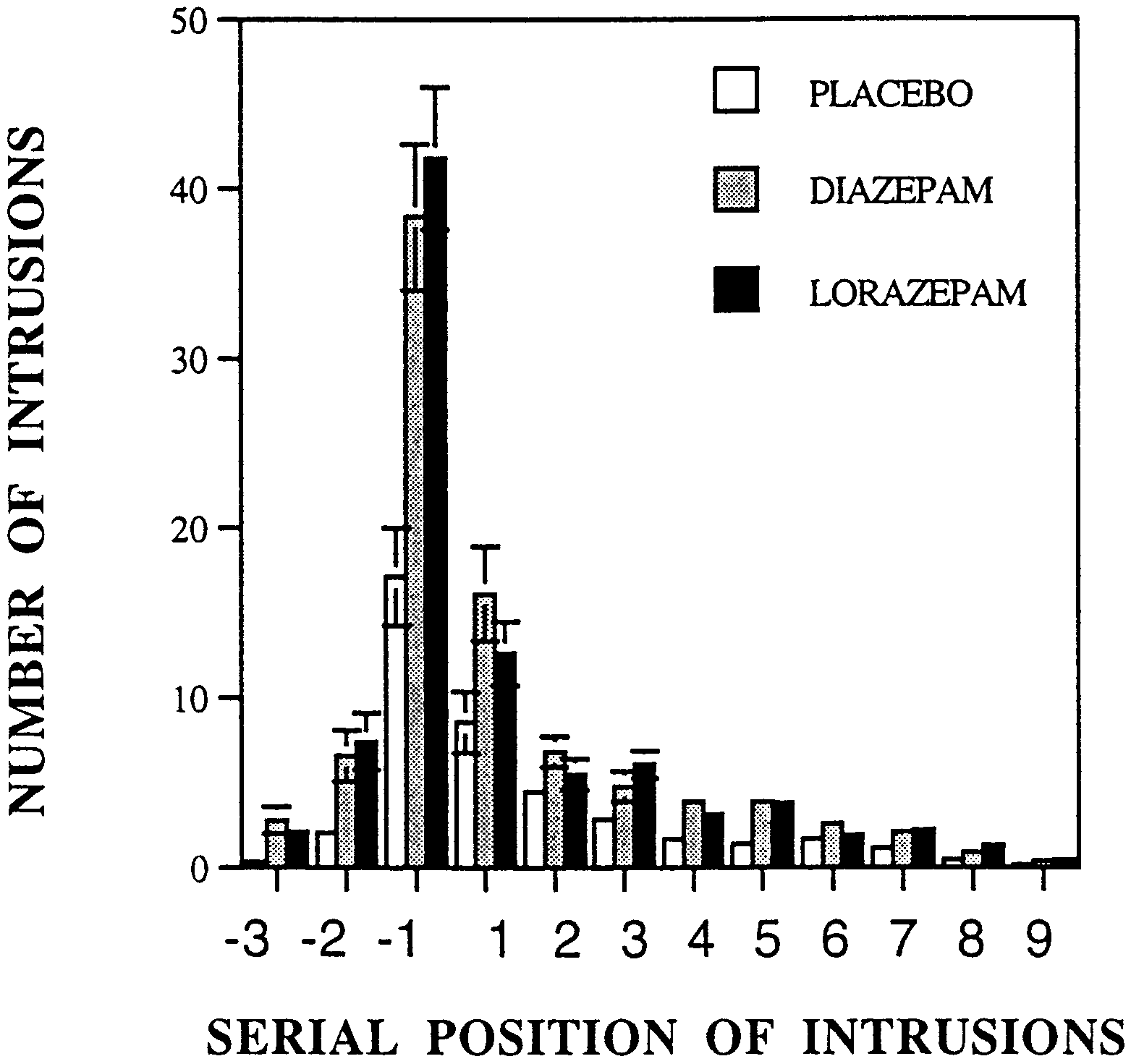