group because they do not share the most striking occurrence of a triploid hybrid. In addition, these feature (herein considered as a synapomorphy) of authors described the BrdU replication banding the group, that is, the golden iris with black reticulations. Although Barrio-Amoro´s (2006) pro- Considering the difficulty in defining the groups of posed the exclusion of P. camba from the P. tarsius Phyllomedusa species as well as the uncertain species group, its position in the group is maintained relationships among species of the P. tarsius group, we present for the first time the karyotypes of P.
Phyllomedusa rohdei Mertens, 1926 is distributed camba and P. rohdei. Additionally, we also provide throughout the lowlands of southern Brazil and is Ag-NOR staining for the two species and observe included in the P. hypochondrialis species group with multiple Ag-NORs patterns in the chromosomes of P. ayeaye, P. azurea, P. centralis, P. hypochondrialis, P. megacephala, P. nordestina, P. oreades, and P.
palliata (Caramaschi 2006; Frost 2007). The speciesP. rhodei has the muscle epicoracoideus, considered a synapomorphy for the group by Faivovich et al.
Cytogenetic analysis was carried out on two speci- (2005). Although P. rhodei was included in the study mens of Phyllomedusa camba collected in Ministro by Faivovich et al. (2005), the authors did not Andreazza, state of Roˆndonia (RO) (11u049270 S; present a phylogenetic relationship between this 61u319010 W) north of Brazil and on seven speci- species and others in the P. hypochondrialis species mens of Phyllomedusa rohdei collected in Biritiba- group, nor with species belonging to other species Mirim, state of Sa˜o Paulo (SP) (23u349210 S; 46u029190 W), southeastern Brazil (Figures 1A,B).
With regard to cytogenetic data, most of the The voucher specimens were deposited in the Amphibian collection (CFBH) of the Departa- Phyllomedusa is limited to the diploid number, which is 2n526 for most of the species (Bec¸ak et al. 1970; Batistic et al. 1975; Batistic 1989; Kuramoto 1990).
The mitotic chromosomes were obtained from Concerning differential staining technique, Batistic direct preparations of bone marrow, liver and testis (1989) presented C-banding and Ag-NOR data and treated with 0.01% colchicine at a proportion of suggested a hypothesis for the origin of polyploidy in 0.1 ml/10 g body weight, as described in Baldissera Phyllomedusa based on the position of the Ag-NORs.
et al. (1993) and Silva et al. (2000), or from Morando and Hernando (1997) applied the Ag- NOR technique to chromosomes of P. sauvagii and (1978). To improve the mitotic index, we injected P. hypochondrialis and detected differences in the phytohemagglutinin in some specimens before the number of Ag-NORs between the species as well as a colchicine treatment, at the proportion of 0.1 ml/10 g heteromorphism in P. hypochondrialis. Kasahara et al.
body weight, 48–72 h before sacrifice. Conventional (2007) demonstrated the occurrence of Ag-NORs in staining was made with Giemsa 10% diluted in P. distincta and P. tetraploidea and registered the phosphate buffer pH 6.8, and silver nitrate labeling Downloaded By: [de Pietri, Ana Paula Zampieri S] At: 12:40 12 March 2010 Figure 1. A, adult male of Phyllomedusa camba from Ministro Andreazza, Roˆndonia (RO); B, Phyllomedusa rohdei from Biritiba-Mirim, Sa˜oPaulo (SP).

of the nucleolar organizer regions (Ag-NOR) was As stated by Bogart (1991), centric fusions and obtained by the technique of Howell and Black fissions are the most likely mechanism for changes in chromosomal number. The subfamily Phyllome-dusinae is considered basal in the Hylidae family dueto morphological characters and the diploid number of 26 chromosomes (Bogart 1973; Morescalchi 1990).
Nevertheless, in the species of Phyllomedusa consid- The species P. camba and P. rhodei have a diploid ered to be derived, no alterations have occurred in the number corresponding to 2n526, and a karyotype number of chromosomes, although the presence of similar to that found for the majority of the acrocentric chromosomes and polyploidization in Phyllomedusinae species: Phyllomedusa (Bec¸ak et some species suggest the presence of speciation events al. 1970; Batistic et al. 1975; Batistic 1989; in this anuran group. The species P. tarsius and P.
Morando & Hernando 1997; Kasahara et al.
camba, both of them with acrocentric chromosomes, can be considered very closely related and derived in Pachymedusa (Schmid 1980). An exception was observed in several tetraploid populations of P.
In P. camba, 20 metaphases showed Ag-NORs in burmeisteri from Brazil, with 4n552 (Bec¸ak et al.
the proximal regions of the short arms of pair 1, and in 1970; Batistic et al. 1975; Batistic 1989). The the proximal regions of the long arms of pair 5 karyotype of P. rhodei is made up of metacentric coincident with secondary constriction (Figure 3B).
pairs (1, 4, 10, and 13), and submetacentric pairs (2, In P. rohdei, the silver staining showed an extensive 3, 5–9, 11 and 12), while in P. camba, pairs 1, 4, 7, inter-individual variation in the number and position 10, and 13 are metacentric, 2, 3, 5, 6, and 9 are of Ag-positive regions, in 1p, 3q, 5p, 8p, 11q and 12q submetacentric, and 8, 11 and 12 are acrocentric (Figure 3A). Inter-individual variation in single or (Figures 2A,B). The occurrence of acrocentric pairs multiple Ag-NOR patterns was described by Wiley in P. tarsius observed by Batistic (1989) suggests the et al. (1989) in Hyla chrysoscelis and H. versicolor, proximity of this specie and P. camba. Nevertheless, Foote et al. (1991) in Bufo terrestris, Miura (1994) in these data refute the proposal of Barrio-Amoro´s Rana japonica, Schmid et al. (1995) in Agalychnis (2006), which excluded P. camba from the P. tarsius callidryas, Kaiser et al. (1996) in Dendropsophus group. If the presence of acrocentric pairs is ebraccatus, Silva et al. (1999) in Physalaemus cuvieri, considered a synapomorphy, P. sauvagii, which and Silva et al. (2006) in Leptodactylus mystacinus.
possesses no acrocentric chromosomes (Batistic In Anura, NOR analysis by silver staining has 1989), might be excluded from the P. tarsius group.
shown that species, in both primitive and derived The karyotype with metacentric and submetacentric families, possess only one pair of Ag-NORs in their chromosomes in P. rohdei is compatible to that found by Batistic (1989) for this species and for P.
Robinson 1986). This observation led King et al.
ayeaye and P. hypochondrialis (all allocated to the P.
(1990) to suggest the presence of only a single pair of Ag-NORs in diploid karyotypes as an ancestral Downloaded By: [de Pietri, Ana Paula Zampieri S] At: 12:40 12 March 2010 Figure 2. A, Giemsa-stained karyotypes of Phyllomedusa rohdei; B, Phyllomedusa camba. Note three acrocentric pairs (8, 11 and 12) in P.
camba. 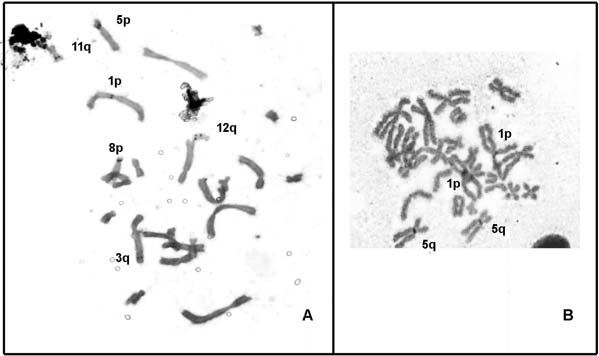 FDA and Drug Use in Food Producing Animals Mel Pence DVM, MS, PAS, Diplomate ABVP (beef cattle) University of Georgia, College of Veterinary Medicine The Food and Drug Administration (FDA) is tightening up the regulations on the use of most drugs in food producing animals to prevent the contamination of our food supply. We can look at this type of action as some infringement on our a