International Journal of Ozone Therapy 7: 000-000, 2008 Is Medical Ozone Safe when Injected
Intra-articularly?
A Comparative Histological Study in Rat
E. ILIAKIS*, I. PETROPOULOS**, A. ILIAKI***, E. AGAPITOS****, G. AGROGIANNIS**** * Orthopaedic Surgeon Hospital Inspector N.M.Y. Athens; Greece** Orthopaedic Surgeon National Centre for Emergency Aid; Greece*** School of Veterinary Medicine, Aristotle; University of Thessaloniki, Greece**** Laboratory of Anatomy and Pathology; University of Athens, Greece Key words: ozone, safety, cartilage
SUMMARY - The therapeutic use of ozone (O -O ) gas is controversial. Some authors claim the gas
mixture is toxic and therefore out of the question, whereas, others hold that it is useful and effective when used following a certain method to treat degenerative diseases, such as knee osteoarthritis, for which the gas has been used empirically. The present work studied the effects of contact of O -O with healthy knee tissues of Wistar rats and compared them to intra-articular injection of a substance known to damage the cartilage. Thirty-six Wistar rats were studied in two groups. Mono-iodoacetic acid (MIA) was injected in the first group in a single dose και, whereas O -O was injected in the second group in frequent doses three times a week for three weeks. The rats were killed 40 days later and articular cartilage and surrounding tissues were studied histologically. MIA caused degenerative osteoarthritis gradually deteriorating at the knees of the first group whereas no major changes were observed in those of the second group. We conclude that follow-ing the methodology of our study medical ozone appears to be safe for use. Introduction
of corticosteroids in acute pain or hyaluronic acid (when we also seek to improve damage to the car- Knee osteoarthritis (OA) is a common high cost tilage) and have been applied for many years.
disease in orthopaedics and decreases the quality Biochemical changes in the levels C6S, C4S, of life especially in the elderly. The main char- and KS, TN-C 2 chemokine, endothelin and trans- acteristic of OA is degeneration of the articular forming growth factor alpha 3 metalloproteinases cartilage and the subchondral bone frequently fol- (MMP), cytokines such as IL-1 and TNF - alpha 4 lowed by inflammation of the synovial membrane and others appear to influence the development of and aggravation of the supporting structure of the knee. The result of all these is pain and dysfunction For some years intra-articular injection of medi- in the mobility of the knee. Total joint replacement cal ozone (O -O ) has been suggested for the treat- usually constitutes the final suggestion for the ment of knee osteoarthritis symptoms and positive rehabilitation of these patients, but it is not free of results have been reported 5. However, its applica- complications. Thus, when applying this treatment, tion appears to be empirical and no histological or side-effects, age, weight and general physical con- biochemical studies have provided evidence for dition of the patient must be taken into considera- Ozone’s powerful oxidant factor 6 has been Conservative treatment constitutes the first reported to be toxic 7,8,9,10 and hence there is scep- choice and many proposals have been made to ticism concerning its use for medical purposes. alleviate symptoms, expecting at the same time an Other studies have shown that if ozone is used improvement in the histological features. The usual rationally it is safe 11 and therapeutic for certain pharmacological recommendation includes anal- diseases. Medical ozone (O -O mix) appears to gesics, non steroidal anti-inflammatory drugs, diac- behave as a bioregulator 12 when it comes into erein, chondroitin sulphate, glucosamine sulphate, contact with a biological liquid, releasing factors magnesium and others. Intra-articular injections from human endothelial cells 13 and normalizing also constitute a frequent choice and the injection the cellular redox balance 14,15. Studies have shown

Is Medical Ozone Safe when Injected Intra-articularly? Figure 1 Sacrifice at 10 days. Initial degeneration of the cartilage with modification of the natural tissue to fibrosis, hyperaemia of the subchondral bone. H.E.×45.
Figure 2 Sacrifice at 40 days. Total destruction of the architecture of the articular cartilage. H.E.×45.
its capacity to alter the levels the cytokines 16 such mechanical techniques 25 or by injection of chemical as TNF-alpha 17, IL 18 and platelet-derived growth substances into the knee joints 26. Monoiodoacetic factor (PDGF), transforming growth factor beta1 acid (MIA) is a material that could cause osteoar- (TGF-beta1), interleukin-8 (IL-8) and other 19,20 thritis in the knees of Wistar rats similar to those of indications of a likely effect of this gas on the humans 27,28. Rodents are the most widely employed articular cartilage when it is injected intra-articu- species for these studies, because their night and larly. Provided that ozone is indicated for use as a day activity has been studied extensively and sev- therapeutic means, due to its well-known antiseptic eral models of osteoarthritis were developed using property 21,22 23,24, it would also succeed in reducing mice, hamsters and Wistars. The present study con- the potential dangers of septic arthritis after intra- stitutes the first stage of comparison of histological articular injection of the gas mixture.
changes and recommended methodology for the Controlled degeneration of the articular carti- proof of action of intra-articular injection of O -O lage for experimental purposes can be caused by 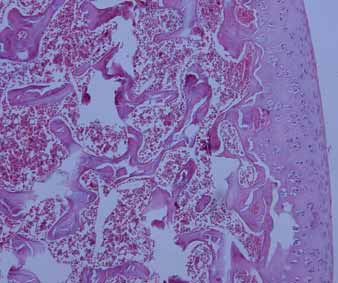 International Journal of Ozone Therapy 7: 000-000, 2008 Figure 3 Normal articular cartilage (water, collagen and pro-teoglycans the surface layer thicker than the deeper layers). Tissue sections of the normal articular surface where the cells of the main membrane of histocell fibroblasts fat cells and mast cells are evident.
Figure 4 The tissues in and around the knee (apart from the cartilage) did not show any major alterations in the long run.
Material and Method
terior joint of the left knee (placebo) was injected with NaCl solution.
Thirty-six (36) male wistar rats weighing 150- 2. Second group (18 Wistars): O -O mix was inject- 180g were employed in our study. A variable vol- ed into the posterior joint of the right knee while in ume (5 to 50 µL ) automatic pipette was required. the left knee joint (placebo) was injected with O .
An ozone generator (Multiossigen mod. PM 93, The animals remained in plastic cages through- Italy). Biochemical reactors (Iodoacetic acid I out the experiment. They were exposed to light 8136 amp 5×500 mg, Sigma-Aldrich). The animals every twelve hours (6-18) and the temperature were divided into two groups. After anesthesia and was maintained at 20°C. The subjects received a disinfection a pre-set quantity was administered short anesthesia with the use of ether, long enough for the action, and after the treatment they were 1. First group (18 Wistars): MIA was injected into returned to their cages. The rats were killed by the posterior joint of the right knee while the pos- 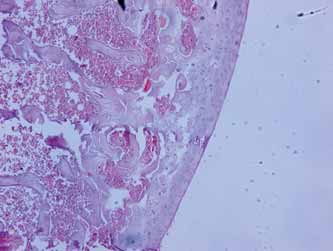