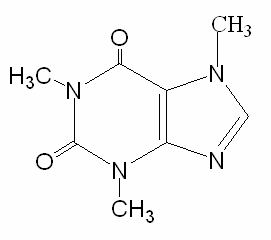 SPECTROPHOTOMETER Application note: A09-010A The quantitative determination of caffeine in beverages
and soft drinks using UV wavelength spectroscopy
Introduction
Caffeine is a naturally occurring alkaloid which is found in the leaves, seeds or fruits of over 63 solutions with chlorinated solvents such as plants species worldwide. The most common dichlormethane and chloroform, a technique sources of caffeine are coffee, cocoa beans, cola nuts and tea leaves and the worldwide caffeinate coffee and tea. After the caffeine is consumption of products derived from these extracted it can be analysed directly by natural materials means that caffeine is one of drugs in the world. Caffeine’s popularity stems pharmacologically active substance and a mild commonly consumed beverages and soft drinks including instant coffee (Nescafe), brewed tea (PG Pyramid Tea Bags), Coca Cola, Pepsi Cola and Red Bull. The analysis is performed on a Jenway 7305 spectrophotometer controlled using the free-of- charge PC software, supplied with each model in the 73 series. The software allows the user to emulate all measurement tasks normally performed on the instrument with the additional benefit of allowing data to be seamlessly transferred to external Microsoft office It is generally agreed that there is little risk of harm when a person consumes less than 300 mg of caffeine a day1,2. However at times of
Reagents
anxiety or stress, or during pregnancy, the FSA recommends consumption of less than 200 mg a day3. While there are no regulatory
requirements to control or label food products with their caffeine content, numerous studies Standard Preparation:-
have been carried out to determine the typical A 1000ppm stock standard of caffeine was prepared by dissolving 198.2mg of caffeine in beverages. A wide variety of methods have 200.0ml purified water. Working standards were prepared by pipetting 25, 12.5, 10, 7.5, 5 and Chromatography (HPLC) being the method of 2.5ml aliquots of the stock standard solution into separate 50.0ml volumetric flasks and diluting to commonly is subject to fewer interferences than Sample Preparation:-
HPLC is an expensive and resource-hungry 200ml aliquots of boiling purified water was technique that is not typically found in the added to each of two 250ml beakers containing scientific teaching labs of schools and colleges. 2g of instant coffee and a single PG pyramid tea Therefore this application note will investigate bag (3.2g of dried tea leaves) respectively. The an alternative analytical method that uses UV coffee and tea preparations were stirred for 30 spectroscopy to analyse and quantify the seconds using a magnetic stirrer (500rpm) and caffeine content of some common beverages allowed to cool to room temperature. The soft

drink samples were used as supplied by the Caffeine Extraction Procedure:-
absorbance allowed the factor of 55.358, A 50ml aliquot was taken from each working included in equation 2, to be determined. standard or sample solution. This aliquot was Equation 2 was then used to calculate the placed into a separating funnel and 25ml of concentration of caffeine in the extracted dichloromethane was added. The caffeine was sample solution, from the solution’s measured extracted by inverting the funnel at least three times, venting the funnel after each inversion. The dichloromethane layer was removed to a clean flask and the extraction procedure was repeated twice more and the solvent layers The caffeine content of the extracted sample Sample Measurement:-
Concentration of
Aliquots of the extracted standards were placed Sample Abs
Extracted
into quartz cuvettes (part code 035 028) and Sample (ppm)
analysed using a 7305 spectrophotometer. The Photometrics mode was accessed by selecting the Photometrics icon from the main menu screen in the PC software and measurements were performed according to the procedure described in the instrument and PC software operating manuals. Microsoft Excel was used to tabulate the measurement data and perform a Table 2. The caffeine concentration of the
linear regression analysis. This allowed a extracted sample solutions.
concentration factor to be calculated which was then input into the settings in the Concentration The final caffeine content of the beverage under test is then calculated from the extracted concentration mode was then used to quantify sample solution’s concentration using equation the caffeine concentration of the sample 3. Dividing this value by the volume of the drink solutions with measurements performed against (3) Caffeine content (mg) = Conc (ppm) x ⎜ The absorbance values of the six working Caffeine
Total Measured Content Caffeine
Sample Sample Sample
Caffeine Std
Absorbance
Vol (ml) Serving (mg/ml)
Conc. (ppm)
Table 1. Standard absorbance values.
Table 3. The calculated caffeine content of
A linear regression of absorbance vs standard beverages and soft drinks.
concentration, forced through the origin, gave Of the five samples tested the sample of Red Bull had the highest total and per ml content of caffeine. When ranking the drinks in terms of

caffeine content per serving the order was Red 4. http://www.nescafe.com/worldwide/en/well- Bull ⇒ Pepsi Cola ⇒ Instant Coffee ⇒ Coca Cola ⇒ PG Tea. Instant coffee and PG Tea rise from third and fifth places to second and 5. http://www.food.gov.uk/science/surveillance third respectively when the drinks are ranked in 6. http://www.cspinet.org/new/cafchart.htm Conclusions
When the results obtained in this application 7. http://www.timesonline.co.uk/tol/life_and_st previous reports, or by the drinks manufacturer, it can be seen that the results obtained using the 7305 spectrophotometer are broadly in line with expectations with the exception of the two Published
Caffeine Content
Per Serving

Table 4. Published Caffeine Content of
Beverages and Soft Drinks
The higher than expected values obtained for
the cola drink samples may be the result of
additional compounds, that absorb light at the
wavelength used in this application note, being
extracted into the dichoromethane sample
solution. The resulting solution would give a
higher than expected absorbance reading and
calculated caffeine content. Alternative
extraction procedures could be investigated to
see of the interfering compounds could be
excluded from the extraction solution.
References
1. Smith AP., "Caffeine at Work." Hum 2. Rogers PJ, Dernoncourt C. "Regular caffeine consumption: a balance of adverse and beneficial effects for mood and psychomotor performance." Pharmacol Biochem Behav. 1998 Apr;59(4):1039-45. 3. http://www.food.gov.uk/news/newsarchive/2

MONONUCLEOSIS WHAT IS MONONUCLEOSIS? Mononucleosis (often called “mono”) is an infection caused by the Epstein-Barr virus. Signs of mono include fever, sore throat, headaches, white patches on the back of your throat, swollen glands in your neck, feeling tired and not feeling hungry. HOW IS MONO PASSED? Mono is not spread as easily as some other viruses, such as the common cold. The mono virus