Date of the report: 07.05.2002 Report number: 12 Veterinary drugs in poultry and rabbit – secondary investigation Joint campaign by the cantons Basel Country and Basel City (main laboratory)
Background
Antibiotics are used in cattle, pigs and poultry to promote performance (faster growth and improved
feed conversion) as well as in the prophylaxis and treatment of infectious diseases. Worldwide, more
than 40% of veterinary pharmaceuticals produced are used as feed additives. Of these, around 20%
are used to fight infectious diseases, and the other 39% for controlling worms, viruses and parasites.
In Switzerland, veterinary drugs are allowed to be used for therapeutic purposes only. However,
tolerance levels and limit values are repeatedly breached in connection with the prohibited or improper
use of veterinary drugs. The use of antibiotics for veterinary purposes that can also be used in human
medicine may possibly lead to human pathogens developing resistance to antibiotics. Studies show
that in human and poultry isolates, up to a quarter of Campylobacter are fluroquinolone-resistant.
At the end of January of this year, the EU imposed an import ban on fish, poultry meat and rabbits,
with increased concentrations of chloramphenicol being cited as the reason. The investigative
campaign launched by the cantons Basel Country, Basel City and Zurich in response to this revealed
a deplorable state of affairs in relation to poultry imported from China: more than half of the samples
from China that were analysed exhibited residues of veterinary drugs, primarily enrofloxacin. Three
samples were the subject of complaint.
Aims of investigation
In a second campaign, poultry and rabbits from Switzerland and the EU were sampled to test for
antibiotic residues. The same residues as in the first campaign were investigated, so as to allow for a
comparison with the imported poultry from China.
Statutory principles (Ordinance on Contaminants and Ingredients)
Parameter
Limit values
0.1 mg/kg (total for sulfonamide) tolerance value! * Notification by the Federal Office of Public Health of 1.5.2001: provisional limit value Sample description
Around one third of the samples originated from Switzerland and EU Member States, with about a

quarter from Hungary. Both pure chicken meat in the form of chicken pieces or strips of meat and meat in the form of chicken products such as nuggets and ham and cheese-filled cordon bleus were sampled. Besides 55 chicken meat samples, 7 turkey and 2 rabbit samples were analysed. In the case of the poultry products, only chicken meat was investigated. Number of samples collected
Test method
The samples were tested for sulfonamide and chloramphenicol residues via screening tests (Charmes
test). The active ingredient groups comprising quinolones, fluoroquinolones and tetracyclines were
investigated by means of HPLC. Findings above 10 µg/kg were confirmed via LC-MS. In addition, the
label details of the samples were checked. In particular, attention was paid to the label “may have
been produced using antibiotics and/or other antimicrobial performance promoters” that is mandatory
according to the Federal States list of the Federal Office for Agriculture. The assessment is based on
pure chicken meat, i.e. the residue values are to be based on the proportion of meat (letter from the
Federal Office of Public Health dated 9 June 2000).
• Veterinary drugs were detected in 7 poultry samples (11%). • One poultry sample from Hungary was found to contain 51 µg/kg enrofloxacin and was therefore the subject of a complaint. Another sample from Hungary exhibited an enrofloxacin level below the limit value. • 2 samples from Hungary contained residues of ciprofloxacin or sarafloxacin. • In 3 samples (two from Germany, one from Hungary), traces of sulfonamides were detected. 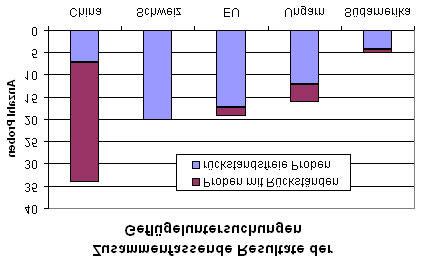 Measures
The ban on the import of poultry meat from China that had been imposed throughout Switzerland on
27 February 2002 was replaced by compelling quality assurance requirements. In addition, the limit
value for enrofloxacin was raised from 30 to 100 µg/kg in connection with the revision of the provisions
of the Ordinance on Contaminants and Ingredients.

Summary of the findings of the State Laboratories of Basel City and Basel Country
Poultry from the EU,
Poultry from
Switzerland,
(1st campaign)
(2nd campaign)
Number of samples that exceeded limit values • Comparison of both investigations shows that the contamination of poultry from China at the time of analysis was markedly greater than for other countries. • All the samples from Switzerland were residue-free. However, State Laboratories for other cantons report occasional positive findings for Swiss products. • All in all, poultry products from China are markedly more heavily contaminated with antibiotic residues than those from other countries. Also, an increased proportion of samples with residues was found for Hungary. • The duty to declare “may have been produced using antibiotics and/or other antimicrobial performance promoters” is currently still justified for Chinese poultry meat. The certificates repeatedly produced concerning the non-use or prohibition of growth promoters are unreliable.

Nurses offer tips for surviving a hospital stay Medical errors kill up to 98,000 U.S. hospital patients a year To cut back on potential for mistakes, vigilance is key, says nurse Ask about every medication the hospital gives you If you think something is wrong, don't back down (CNN) -- Imagine you're about to travel to a foreign land. You've heard it can be a mighty dangerous plac