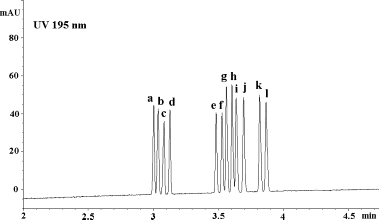 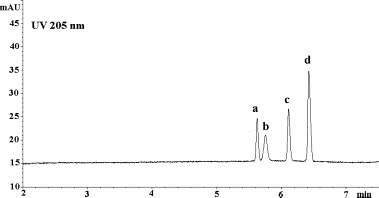 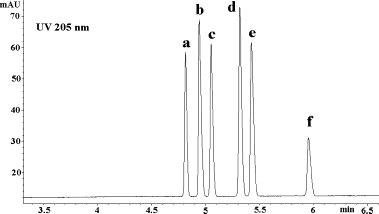 Electrophoresis 2004, 25, 1580–1591 Excellent run-to-run migration time precision is obtainedfor these solutes (RSD  0.12%) [48]. The same CE con-ditions are applicable for special analyses, i.e., the quan-titation of opium preparations [48]. Identification of themajor opium alkaloids is facilitated by the use of auto-mated library searches.
3.5 Quantitative analysis of heroin and
identification of moderately basic
adulterants
Figure 2. Electropherogram of a standard mixture of
(a) d-LSD, (b) d-LAMPA, (c) d-iso-LSD, and (d) tetracaine
Methodology has been previously reported for the quanti- (internal standard). A 32 cm (23.5 cm to the detector win- tative analysis of heroin, basic impurities, and basic adul- dow)6 50 mm ID fused-silica capillary was used. Solute terants using dynamically coated capillaries [49]. It was concentrations were approximately 0.008 mg/mL with necessary to add dimethyl-b-cyclodextrin (DM)-b-CD to CE conditions as described in Section 2.
CElixir Reagent B (pH 2.5) not only to resolve solutes fromheroin, but also to improve the separation of the basic Table 8. Relative migration times for LSD and related
impurities. In order to fully resolve these compounds, a compounds using a dynamically coated capil- longer capillary (relative to the capillary length in this pres- ent study) was required (total length, 64 cm) with a higher temperature [49]. For this study since we are only con- cerned with the quantitation of heroin and the screeningof adulterants the shorter capillary is sufficient. Figures of merit for heroin are shown in Table 4. Excellent linearity, excellent run-to-run area precision and quantitative accu- racy are obtained for this solute. Excellent run-to-run migration time precision is also obtained for heroin (RSD 0.07%). Relative migration time data for heroin, moder- ately basic impurities and mostly moderately basic adul-terants (nicotinamide and aminopyrene are weak bases)are shown in Table 9. Screening for adulterants is facili- 3.4 Identification of major alkaloids in opium
tated by the use of automated library searches.
Five major alkaloids in opium, including morphine, papa- Table 9. Relative migration times for heroin and related
verine, codeine, noscapine, and thebaine, are well re- compounds using a dynamically coated capil- solved using the same run buffer used for LSD (Fig. 3).
Figure 3. Electropherogram of a standard mixture of
(a) morphine, (b) papaverine, (c) codeine, (d) noscapine, (e) thebaine, and (f) tetracaine (internal standard). A 32 cm (23.5 cm to the detector window)650 mm ID fused- silica capillary was used. Solute concentrations were ap- proximately 0.02 mg/mL with CE conditions as described  2004 WILEY-VCH Verlag GmbH & Co. KGaA, Weinheim 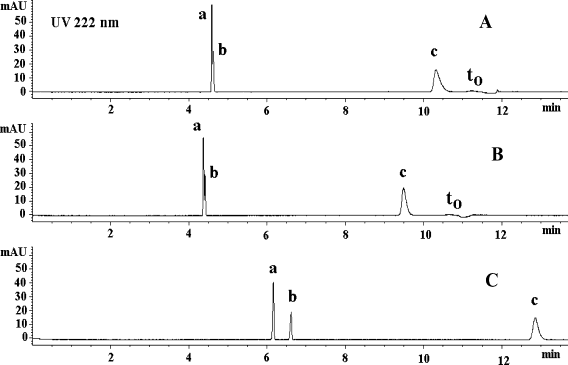 Electrophoresis 2004, 25, 1580–1591 Table 9. Continued
bilities. In addition, psilocybin (Psilocybe mushroom spe-cies) migrates near to with significant tailing using CElixir Reagent B (pH 2.5) (Fig. 4A). This is due to the amphoteric nature of psilocybin at pH 2.5 (fully ionized tertiary aminegroup and mostly ionized phosphate group). Lowering the pH to 1.8 partially protonates the psilocybin phosphate group (i.e., imparts a greater D1 charge) and therefore increases the effective mobility of this solute. As a result, psilocybin migrates further from to with an improved peak shape (Fig. 4B). As expected, the relative mobilities of psilocybin and bufotenine, which are also fully protonated at pH 1.8, are similar to their relative mobilities at pH 2.4.
However, due to secondary equilibrium, psilocin and bufotenine are fully resolved after the addition of 50 mM HP-b-CD to the CElixir Reagent B (pH 1.8) buffer with good peak shape for psilocybin (Fig. 4C). Since psilocin and bufotenine have easily distinguishable diode array UVs (Figure 5) and are not found together, the pH 1.8 run buffer which gives shorter migration times for psilocybin is recommended. Excellent run-to-run precision is ob- tained for these solutes (RSD  0.39%).
3.7 Identification of neutral, acidic, and weakly
3.6 Identification of major alkaloids in
basic adulterants
hallucinogenic mushrooms
Methodology has been previously reported for the identi- Psilocin (“Psilocybe mushroom species”) and bufotenine fication of weakly basic, acidic, and neutral adulterants (Bufo toad species) comigrate (Fig. 4A). This is not sur- in heroin using dynamically coated capillaries [49]. This prising since the fully protonated positional isomers psilo- same methodology is applicable to the identification of cin and bufotenine (differing only in position of a phenol these adulterants in phenethylamine and cocaine sam- functional group) would be expected to have similar mo- ples. Relative migration time data for neutral, acidic and Figure 4. Comparison of CE
separations of standard mixture
of (a) psilocin (0.05 mg/mL), (b)
bufotenine (0.04 mg/mL), and
(c)
using various run buffers. A 32cm (23.5 cm to the detectorwindow)650 mm ID fused-silicacapillary was used at 157Cwith a voltage of 10 kV with100 mbar?s injections. (A) An-ionic coating reagent and runbuffer consisting of CElixir Re-agent B (pH 2.5). (B) Anioniccoating reagent and run bufferconsisting of CElixir Reagent B(pH 1.8). (C) Anionic coatingreagent and run buffer consist-ing of CElixir Reagent B (pH 1.8)1 50 mM HP-b-CD.
 2004 WILEY-VCH Verlag GmbH & Co. KGaA, Weinheim 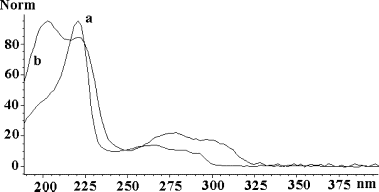 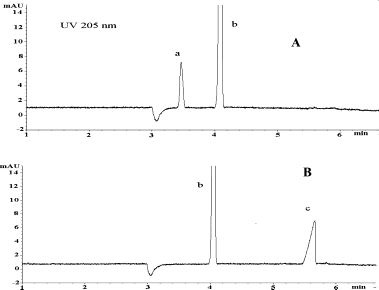 Electrophoresis 2004, 25, 1580–1591 Table 10. Relative migration times for weakly basic,
acidic, and neutral solutes using a dynamicallycoated capillary system Figure 5. Diode array UV spectra of (a) psilocin, and
(b) bufotenine obtained using experimental conditions weakly basic adulterants are shown in Table 10. Screen- ing for these adulterants is facilitated by the use of auto- 3.8 Quantitative analysis of GHB and GBL
The separation of GHB and GBL using dynamically coated capillaries is shown in Figure 6. A pH 6.5 run buffer (50 mM phosphate 1 3% SDS) is chosen to minimize the chemical interconversion of GHB and GBL [55]. As demonstrated in Figs. 6A and B, no interconversion is obtained for either solute under these conditions. Further- more, no interconversion occurs even for solutions sitting overnight in the autosampler. This run buffer is used because the latter reagent gives a peak, which can inter- fere with GBL. While GBL, a neutral solute, is retained bythe micelle, the negatively charged SDS aggregate shouldrepel the anionic GHB. The longer migration time of the Figure 6. Electropherograms of (A) standard mixture of
latter solute is probably due to the high mobility of this (a) GBL (7.0 mg/mL), and (b) resorcinol (0.1 mg/mL) (inter- relatively small solute in the anodic direction. The triangu- nal standard) and (B) standard mixture of (b) resorcinol(internal standard) and (c) GHB (3.5 mg/mL). A 32 cm lar GHB peak is caused by electromigration dispersion of (23.5 cm to the detector window)650 mm ID fused-silica the anionic solute present at a relatively high concentra- capillary was used with CE conditions as described in tion (weak extinction coefficient). According to Weinber- ger [56], quantitative results are still maintained as long  2004 WILEY-VCH Verlag GmbH & Co. KGaA, Weinheim

Electrophoresis 2004, 25, 1580–1591 as peak areas are used and sufficient resolution is de- 4.561024 to 3.661024. However, for the SDS system, re- signed into the separation. This is the case as indicated producible separations were obtained (RSDs of effective by the figures of merit (see Table 4). Excellent linearity, excellent run-to-run area precision, and good quantitative Since different lots of the same CD can vary in both the accuracy are obtained for these solutes. Excellent run- degree of substitution* and the position of substituents, to-run precision is also obtained for these solutes (RSD each time a CD from a new batch is received, test mix-  0.12%). Due to a very weak extinction coefficient, tures are analyzed. For multiple lots of both CDs there 1,4-butanediol was not detected as high as 10.0 mg/mL were no significant changes for most separations tested.
concentration. Unlike GHB, this solute is easily analyzed For a most recent lot of HP-b-CD, d-methamphetamine by GC [55]. Although GBL is also easily analyzed by GC, comigrated with d-pseudoephedrine. Changing the CD this compound can be encountered in combination with concentration from 50 mM to 45 mM resolved these solutes and gave the expected separation for the othercompounds in the test mixtures.
3.9 Reproducibility
Certain test solutes were analyzed by multiple CE sys- 3.10 Applications of the methodology to seized
tems (consecutively, on the same day) over a two-week drugs exhibits
period. d,l-Methamphetamine, d,l-MDMA and d,l-n-bu- Examples of the above methodology for the analysis of tylamphetamine were separated using CElixir Reagent B seized drug samples are shown in Figs. 7–9. These exam- (pH 2.5) and CElixir Reagent B (pH 2.5 ) with 50 mM HP-b- ples include the analysis of an illicit methamphetamine CD. Theophylline and caffeine were resolved by using50 mM phosphate-borate (pH 6.5) with 3% SDS. Althoughno significant changes in the phenethylamine separations * Using electrospray-MS, the manufacturer of DM-b-CD has occurred, the EOF for the SDS system decreased from shown that different lots have different degrees of substitution.
Figure 7. CE analysis of an illicit methamphetamine tablet (same sample vial) using multiple run buffers
with a 32 cm (23.5 cm to the detector window)650 mm ID fused-silica capillary operating at 157C. (A)
Electropherogram with anionic coating reagent and run buffer consisting of CElixir Reagent B (pH 2.5)
with a voltage of 10 kV and 100 mbar?s injection. Identity of peaks: (a) d-methamphetamine, (b) l- or
d-n-butylamphetamine (internal standard), and (c) l- or d-n-butylamphetamine. (B) Electropherogram
with anionic coating reagent and run buffer consisting of CElixir Reagent B (pH 2.5) 1 50 mM HP-b-CD
with a voltage of 20 kV and 100 mbar?s injection. Identities of peaks identical to (A). (C) Electrophero-
gram of co-injection of 100 mbar?s of sample and 35 mbar?s of standard with CE conditions as in (B).
Identity of peaks are same as (A) except for (d) l-amphetamine, (e) d-amphetamine, (f) l-methamphet-
amine, (g) l or d-MDA, (h) l or d-MDA, (i) l or d-MDMA, (j) l or d-MDMA, (k) l or d-MDEA, and (l) l or d-MDEA.
(D) Electropherogram with anionic coating reagent and run buffer consisting of 50 mM phosphate-borate
(pH 6.5) 1 3% SDS with a voltage of 8.5 kV and 100 mbar?s injection. Identity of peak is (m) caffeine.
 2004 WILEY-VCH Verlag GmbH & Co. KGaA, Weinheim 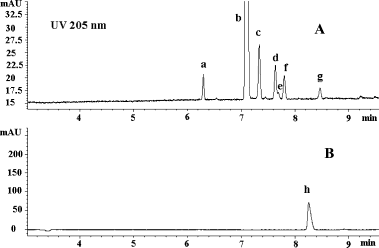 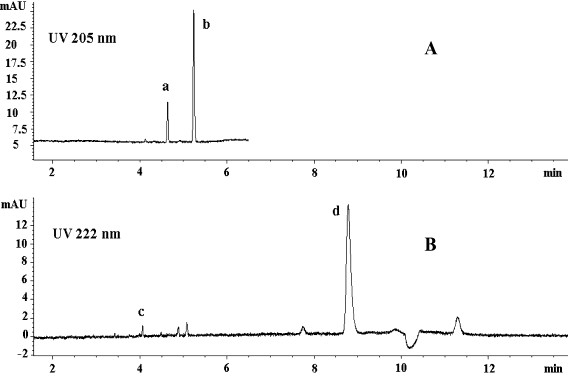 Annex to newsletter regarding the BPTO Resolution 80/2013. The full list of products considered strategic by Ministry of Health and neglected diseases is discriminated in ordinances No. 978/2008 and No. 1284/2010 of Ministry of Healthy and Annex 1 of Resolution 80/2013. I. Pharmaceutical segment 1. Antiviral (including antiretroviral): Atazanavir Darunavir Efavirenz Enfuvirtide Entecav