Lithium Dilution Cardiac Output Measurement in Oleic
Acid–Induced Pulmonary Edema
Tadayoshi Kurita, MD, Koji Morita, PhD, Hiroyuki Kawasaki, BSc, Kiyoyasu Fujii, BSc, Tomiei Kazama, MD, and Shigehito Sato, MD Objective: To determine whether lung injury influences
infusion, CO measurements were repeated in the same man-
the accuracy of lithium dilution cardiac output (CO) mea-
ner as the control measurement had been taken.
surement.
Measurements and Main Results: Under each condition,
Design: Animal experimental study.
right atrium lithium injection was similar to left ventricle
Setting: Animal experimental laboratory.
lithium injection. The mean of these differences at injury
Participants: Swine (n ؍ 23) weighing 26.4 ؎ 2.47 kg
(؊0.06 ؎ 0.55 L/min) was the same as that at control
(mean ؎ SD).
(؊0.05 ؎ 0.36 L/min).
Interventions: The animals were anesthetized and trache-
Conclusions: Although the variability of lithium dilution
otomized, then a pulmonary artery catheter was inserted
CO measurement after oleic acid–induced pulmonary edema
into the right jugular vein, and a catheter (18G) was placed
was greater than that of the control, this technique was
in the femoral artery. After median sternotomy and pericar-
acceptable even in cases of lung injury.
diotomy, a left ventricular catheter (18G) was directly in-
Copyright 2002, Elsevier Science (USA). All rights reserved.
serted. CO was measured by giving a bolus injection of
lithium chloride into either the right atrium or the left ven-
KEY WORDS: cardiac output (CO), indicator dilution, lithium
tricle in each animal. After control measurements, perme-
dilution, thermodilution, critical care, lung injury, oleic acid,
ability pulmonary edema was initiated by infusing oleic acid
pulmonary edema, measurement technique, pulmonary ar-
into the central vein (injury). About 2 hours after oleic acid
tery catheter
THE LITHIUM DILUTION TECHNIQUE for the mea- drome. If there is a significant loss of lithium after an increase
surement of cardiac output (LiDCO) (LiDCO, Ltd, Lon- in pulmonary capillary permeability, this loss could affect the don, UK) was introduced by Linton et al1,2 in 1993 and has CO values measured by the LiDCO technique. To the authors’ been developed further more recently. The LiDCO system has knowledge, no previous studies have investigated the reliability been approved by the Food and Drug Administration and is of the LiDCO technique after acute lung injury. The present now in use in several hospitals in the United States. In this study was conducted to assess the reliability of the LiDCO method of cardiac output (CO) measurement, lithium chloride technique by comparing the CO values before and after injec- is injected into the atrium through a central venous catheter, tion of lithium chloride into the right atrium or left ventricle and CO can be determined from the arterial lithium dilution using a pulmonary edema model in swine.
curve, without a pulmonary artery catheter. In a previous ani- mal study, this method was more accurate than that of conven-tional thermodilution in comparison with direct electromag- This study was approved by the Committee on Animal Research, Hamamatsu University School of Medicine, Hamamatsu, Japan. Twenty- netic flowmetry (the laboratory gold standard).3 A peripheral three swine (mean body weight Ϯ SD, 26.4 Ϯ 2.47 kg) were studied.
vein, which is more easily accessed than a central vein, could After administration of ketamine, 10 mg/kg intramuscularly, general be used for the indicator injection port.4,5 Because there are anesthesia was induced by inhalation of 5% sevoflurane in oxygen at 6 some objections regarding the use of a pulmonary artery cath- L/min using a standard animal mask. After tracheostomy, anesthesia eter,6 this method could be considered as an alternative one that was maintained with 4% end-tidal sevoflurane and 100% oxygen via does not involve the use of a pulmonary artery catheter for mechanical ventilation. A peripheral venous catheter (20G) was placed management of critically ill patients.
in the dorsal ear vein, and lactated Ringer’s solution was infused at a The accuracy of the LiDCO method depends on the loss of rate of 10 mL/kg/h. After induction, pancuronium bromide was admin- lithium in the lungs being negligible; Band et al7 reported that istered to ensure proper control of ventilation. Lead II of an electro-cardiogram was monitored with subcutaneous electrodes in the legs.
this loss was clinically insignificant. In clinical situations, the A pulmonary artery catheter (5F, 4-lumen; Nihon Kohden, Tokyo, pulmonary capillary permeability becomes greater than normal Japan) was inserted into the right jugular vein, and a catheter (18G) was as a result of raised left atrial pressure, residual effects of recent placed in the femoral artery. After median sternotomy and pericardiot- cardiopulmonary bypass, and adult respiratory distress syn- omy, a left ventricular catheter (18G) was directly inserted. The posi-tion of the left ventricular catheter was checked after the swine hadbeen killed with potassium chloride under deep anesthesia with 5% From the Department of Anesthesiology and Intensive Care, inspired sevoflurane. A lithium sensor was attached to the femoral Hamamatsu University School of Medicine, Hamamatsu; and Research artery for measurement of the lithium concentration. Heparin (100 and Development Center, Nipro Corporation, Osaka, Japan. U/kg) was administered to avoid blood coagulation on the membrane All funding from the Department of Anesthesiology and Intensive surface of the lithium sensors, and deterioration of the sensors was Care, Hamamatsu University School of Medicine. prevented. By warming with heat lamps, the blood temperature of the Address reprint requests to Tadayoshi Kurita, MD, Department of swine was maintained in the range of 38.5°C to 40.0°C.
Anesthesiology and Intensive Care, Hamamatsu University School of After hemodynamic stability had been maintained for at least 10 Medicine, 1-20-1 Handayama, Hamamatsu, 431-3192 Japan. E-mail: minutes, CO was determined. The LiDCO technique was performed by giving a bolus injection of lithium chloride into the right atrium through Copyright 2002, Elsevier Science (USA). All rights reserved. the atrial port of the pulmonary artery catheter (LiD-RA) or into the left ventricular catheter (LiD-LV). During apnea at the end of expiration, the same person administered lithium chloride. The interval between Journal of Cardiothoracic and Vascular Anesthesia, Vol 16, No 3 (June), 2002: pp 334-337 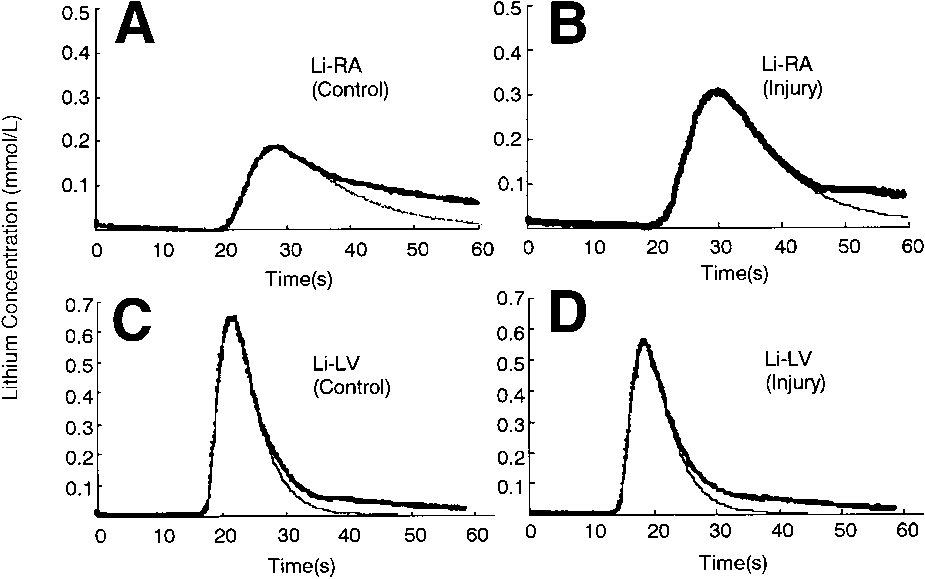 LITHIUM DILUTION CARDIAC OUTPUT MEASUREMENT transit time of lithium dilution curves representing injection into the leftventricle).9 The statistical data analysis was performed using StatView 4.54 (Abacus Concepts, Berkeley, CA). A paired t-test was performed tocompare each arterial blood gas and hemodynamic parameter, LiD-RA,LiD-LV, the difference between LiD-RA and LiD-LV (⌬), the differ-ence expressed as a percentage of the left ventricular injection value(⌬%), and MTT-LiD-RA and MTT-LiD-LV between control and in-jury conditions. LiD-RA and MTT-LiD-RA were compared withLiD-LV and MTT-LiD-LV under each condition by Student t-test. Thelinear regression equations of LiD-RA and LiD-LV under each condi-tion were calculated by simple linear regression analysis using theleast-squares method. As recommended by Bland and Altman,10 thedifference (LiD-RA Ϫ LiD-LV) was plotted against (LiD-LV ϩ LiD-RA)/2 for each condition, and the means and SDs (bias and precision) (A and B) Lithium dilution curves for lithium chloride in-
of the differences were calculated. All data are expressed as mean Ϯ jected into the right atrium of the control (A) and after injury (B). (C
SD. A level of p ϭ 0.05 was considered significant in each statistical and D) Lithium dilution curves for lithium chloride injected into the
left ventricle of the control (C) and after injury (D). The bold lines
show the data points recorded from the lithium ion selective elec-
trode. The regular lines are the least-squares lognormal derived
using the points from 0 to 10% down from the peak on the washout
The representative dilution curves using both injection sites limb. The data points deviate from the lognormal as the lithium ion
and those before and after injury are shown in Fig 1. All starts to recirculate.
dilution curves closely approximated a lognormal curve to 50%below the peak. The arterial blood gas analysis and hemody-namic data for control and oleic acid–induced injury groups are LiD-RA and LiD-LV was kept as short as possible. The paired mea- shown in Table 1. Two hours after oleic acid administration, surement of CO was made in each animal. After the control measure- the pH and PaO2 significantly decreased, and the PaCO2, mean ment was obtained, 0.1 mL/kg of oleic acid was administered into the pulmonary artery pressure, and pulmonary artery occlusion right atrium over 1 hour to produce the pulmonary edema model. About pressure significantly increased. No significant differences 2 hours after oleic acid administration and after obtaining hemody- were observed between the mean systemic arterial pressure of namic stability, CO measurements were determined using the same the respective groups. Table 2 shows LiD-RA, LiD-LV, differ- The LiDCO system was used for the measurements of CO using ences in CO, and mean transit time of lithium dilution curves lithium dilution. CO was measured by injecting 1 mL of an isotonic representing injection into the right atrium (MTT-LiD-RA) and solution of lithium chloride (0.15 mol/L) while withdrawing arterial mean transit time of lithium dilution curves representing injec- blood from the femoral arterial catheter at 4 mL/min past the lithium tion into the left ventricle (MTT-LiD-LV) for each condition.
sensor. A roller pump was used to regulate the blood flow from the Under both conditions, no statistical differences were observed femoral arterial catheter. Lithium chloride solution, 1 mL, was injected between LiD-RA and LiD-LV, and MTT-LiD-RA was signif- as a bolus into the right atrium through the atrial port of the pulmonary icantly greater than MTT-LiD-LV. The mean of those differ- artery catheter or into the left ventricular catheter during apnea at the ences (⌬) was Ϫ0.05 Ϯ 0.36 L/min (⌬% ϭ Ϫ1.84 Ϯ 9.18%) end of expiration. The same person performed all injections. To ensure for the control and Ϫ0.06 Ϯ 0.55 L/min (⌬% ϭ Ϫ0.16 Ϯ that the bolus injection dose was exactly 1 mL, the deadspaces of the 12.62%) for the injury conditions. No significant differences in central venous lumen of the pulmonary artery catheter (0.39 mL) andthe left ventricular catheter were filled with lithium chloride solution any parameter were observed between control and injury con- until a small amount of indicator leakage was observed and a small peak appeared on the recording curve of the concentration time course.
The correlations between LiD-LV and LiD-RA in each state The disposable sensor consisted of a lithium-selective electrode in a are shown in Fig 2. The correlation coefficient of the linear flow-through cell. The voltage across the lithium-selective membrane regression line between LiD-LV and LiD-RA in the control was digitized on-line and recorded by a dedicated computer, whichconverted the voltage signal to lithium concentration and calculated COas: CO (L/min) ϭ [dose of lithium chloride (mmol) ϫ 60]/[area undercurve (mmol/xs/L) ϫ (1 Ϫ PCV)] (area under curve ϭ the integral of Table 1. Arterial Blood Gas and Hemodynamic Parameters
the primary curve; PCV ϭ packed cell volume). Division by (1 Ϫ PCV) converts plasma flow to blood flow because the lithium ion is distributed only in the plasma fraction of blood. Packed cell volume was measured as the value of hematocrit (Kubota Hematocrit KH- 120A, Tokyo, Japan) before each CO measurement. The primary circulation curve was distinguished from the secondary (or recircula- tion) curve by Linton’s8 method based on the theory of lognormal analysis to determine the integral of the primary curve. After eachexperiment, the obtained curves were evaluated to determine whether they approximated a lognormal curve, and mean transit times (MTT) Abbreviations: MAP, mean arterial pressure; MPAP, mean pulmo- were calculated (MTT-LiD-RA, mean transit time of lithium dilution nary arterial pressure; PAOP, pulmonary arterial occlusion pressure; curves representing injection into the right atrium; MTT-LiD-LV, mean 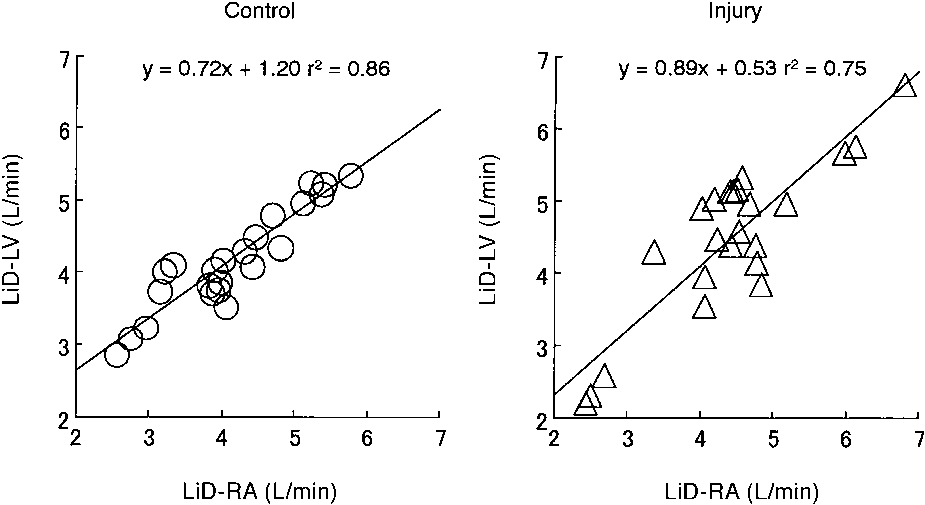