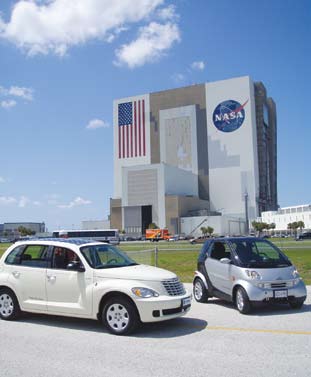 Lithium Battery power Delivers Electric Vehicles to Market
As increased energy efficiency, and particularly fuel Hybrid Technologies Inc., a manufacturer and efficiency, becomes a greater concern, hybrid and marketer of lithium-ion battery-EVs, based in Las Vegas, electric vehicles gain greater prominence in the Nevada, and with research and manufacturing facilities market. Electric vehicles (EVs), in particular, provide an in Mooresville, North Carolina, entered into a Space Act attractive option as they produce no emissions during Agreement with Kennedy Space Center to determine operation, isolating any potential emissions and effluents the utility of lithium-powered fleet vehicles. Under this in the manufacturing and energy-generation streams. agreement, the company supplied a fleet of cars for the The necessary energy stores to support a shift to EVs engineers at Kennedy to test. In return for the engineering already exist, as utilities constructed to address peak expertise supplied by the NASA employees, the Center was demands have off-peak surpluses sufficient to charge given the opportunity to use the zero-emission vehicles about 180 million plug-in hybrid or all-electric cars. for transportation around the Kennedy campus. NASA According to a report from the U.S. Department of contributed engineering expertise for the cars’ advanced Energy’s Pacific Northwest National Laboratory, there is battery management system, and vehicles selected enough excess generating capacity during the night and for use in the Kennedy fleet included the Hybrid PT morning to allow more than 80 percent of today’s vehi- Cruiser, lithium smart fortwo, and a high-performance cles to make the average daily commute solely using this electricity. Effective energy management sees its ultimate The vehicles were powered by Ballard Power Systems’ realization in the vehicle-to-grid (V2G) concept, in which 312V 67 MS electric drive system, which has a 32kW plug-in hybrid and electric vehicles can be used to balance continuous rating and delivers a peak power of 67kW, energy demand and consumption. In a V2G system, mil- with torque of 190 Nm (140 lb-ft). Hybrid Technologies lions of automotive batteries could absorb excess power selected this motor based on its proven track record and generated, and release it back into the grid at times of Hybrid Technologies worked with Kennedy Space Center in excellent power-to-weight ratio. The electric PT Cruisers insufficient supply. With a several kilowatt-hour storage the testing and development of its line of electric vehicles.
have a top speed in excess of 80 miles per hour and a capacity per vehicle, millions of operational plug-ins could are encouraging more and more consumers to consider range of 120 miles. Charge time is 6-8 hours with either act as a safety net for the power grid, supplying backup electric and hybrid vehicles. In addition, a study by the 110-120 V or 220-240V, and the lithium-ion battery power in an outage, with the vehicle owners credited for U.S. Department of Transportation has indicated that pack has a cycle life of more than 1,500 charges.
power returned to the grid. This smoothing of excess and plug-in cars capable of 50 miles per day would meet the In addition to the vehicles supplied to NASA, the deficiency in the power grid would also help stabilize needs of 80 percent of the American driving public, the company provided a fleet of lithium-ion battery-powered intermittent sources of energy such as wind power and vehicles for use by the U.S. Environmental Protection NASA has taken a keen interest in battery-powered Historically, the primary obstacles to the widespread vehicles, and is encouraging their continued development. application of EVs were lack of infrastructure The “NASA Official Fleet Management Handbook,” development and a lack of sufficiently robust battery regarding the use of alternative fueled vehicles, states: Hybrid Technologies deployed the first all-electric taxi technologies to consistently power vehicles for an “Ideally, all Centers should have on-site alternative in New York City and has begun demonstrating smart extended duration and at performance levels suitable to fuel facilities . . . . Centers are encouraged to use NEVs fortwo conversions like the ones used at Kennedy. The a modern urban environment. Technology may at last [Neighborhood Electric Vehicles] to fill inventory company also delivered an additional two PT Cruiser- have caught up with the need, and rising petroleum prices based electric taxis and an electric Chrysler Town & 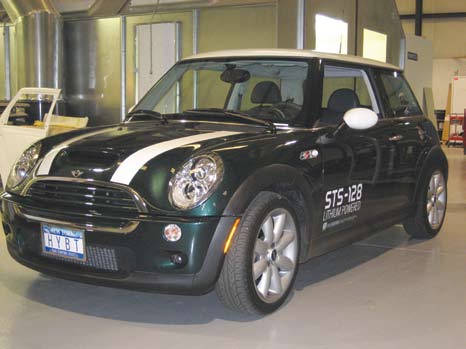 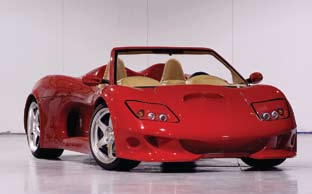 Country minivan to the city of Sacramento for use by a private para-transit nonprofit organization. Most recently, displays its NASA heritage and boasts a range of 120 miles at Hybrid Technologies has produced an EV version of the popular MINI Cooper, which debuted in the December 2007 Sam’s Club catalog. The EV MINI Cooper proudly displays its NASA heritage, sharing the STS-128 designa-tion with an upcoming Space Shuttle Endeavor mission. It boasts a range of 120 miles at 75 miles per hour, and is driven by a 40kW electric motor and powered by a 30kWh battery pack. The appeal of the electric MINI is strong and widespread, and Hybrid Technologies conver-sions have already attracted celebrity fans.
Also available from Sam’s Club, the 2007 Hybrid Technologies lithium-powered smart fortwo EV (also available as a limited edition STS-118 smart fortwo) has an estimated range of 150 miles, a top speed over 70 mph, and takes only 4 hours to charge at 220 volts. There are two electric motors that can be used in the vehicle, one from Ballard and one from Siemens VDO. The lithium polymer battery pack comes from Kokam America Inc., and the battery management system is Hybrid Technologies’ own. As an introductory offer, conversions, Hybrid Technologies offers PT Cruiser and Sam’s Club included a behind-the-scenes trip to Kennedy and attendance at a space shuttle launch, with purchase Even more impressive than its line of conversions, of one of the EVs. When asked about the availability of Hybrid Technologies now also offers a series of purpose- amenities such as air conditioning and heating, comforts built lithium electric vehicles dubbed the LiV series. The not always incorporated into EV conversions, Richard LiV series is designed from the ground up at Hybrid Griffiths, Strategic Relations for Hybrid Technologies, Technologies’ Mooresville plant. The LiV Wise is aimed stated “The [smart fortwo EV] has absolutely every option, at the urban and commuter environments, and is larger Hybrid Technologies offers the LiV series of purpose- every feature that a regular, production smart car has.” and offers more interior space than the smart car, the built lithium electric vehicles, which also includes custom Griffiths estimated the extra amenities consume about conversion of which is called the LiV Dash. Hybrid motorcycles, utility vehicles, and mobility scooters.
5 percent of the vehicle’s battery capacity. “We’re offering Technologies has rounded out the LiV line with custom the fully electric smart car to Sam’s Club members as it motorcycles, utility vehicles, mobility scooters, bicycles, LiV™, Wise™, and Dash™ are trademarks of Hybrid represents the latest in advanced lithium technology . . . . and even a military vehicle. Hybrid Technologies plans This limited edition STS-118 smart car will be the perfect to offer these vehicles to the U.S. market on a wider scale MINI Cooper® is a registered trademark of Bayerische Motoren Werke AG.
addition for car collectors or the environmentalist wanting by 2009, and is especially focused on developing a system PT Cruiser®, Town & Country®, and Crossfire® are registered to make a difference by driving a zero emissions vehicle.” that will seamlessly integrate LiV Wise cars in small mar- In addition to the MINI Cooper and smart fortwo smart® and fortwo® are registered trademarks of Daimler AG.