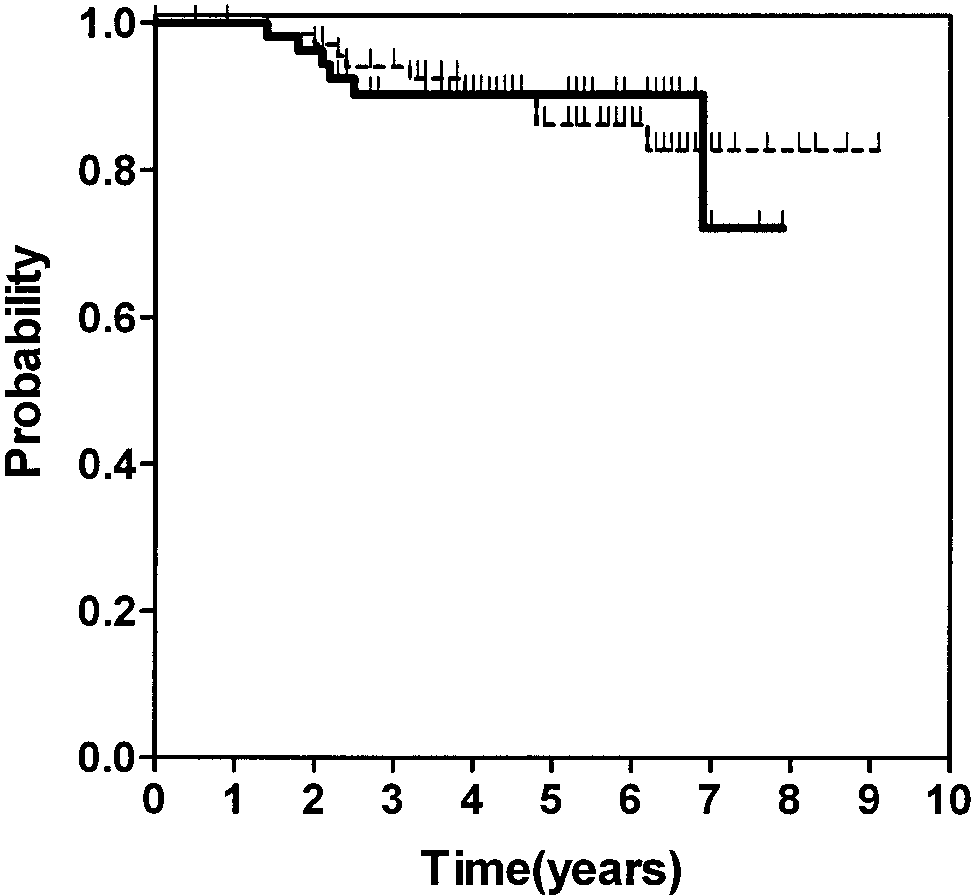 AC vs. CMF in Breast Carcinoma/Bang et al.
TABLE 1
Baseline Characteristics of Study Patients
FIGURE 1. Recurrence free survival of AC versus CMF (P ϭ 0.12). Solid black
line, AC; dashed line, CMF.
MRM, modified radical mastectomy; Quad ϩ AND, quadrantectomy with dissection of axillary lymphnode; RT, radiation therapy; ER, estrogen receptor.
a One patient who underwent Quad ϩ AND received radiotherapy after completion of chemotherapy.
Recurrence Free Survival
Eighteen AC patients developed recurrence of their
breast carcinomas compared with 16 CMF patients.
The 5-year recurrence free survival rate of the AC Patient Population
patients was 64% (95% confidence interval, 57–71%) The trial was started in 1989 and was closed in 1996.
The median follow-up was 57 months. Fifty-eight 72– 84%) for the CMF patients (P ϭ 0.12; Fig. 1). The women were allocated to AC therapy and 70 to CMF site of the first recurrence for AC patients was locore- therapy. This discrepancy in the number of patients gional in 4 (7%) patients, distant in 12 (22%) patients, was due to randomization procedure without bloc.
and combined in 2 (4%) patients. The corresponding Three patients in the AC arm and one patient in the data for the CMF arm were 3 (4%), 11 (16%), and 2 CMF arm were lost in follow-up after one to three (3%) patients, respectively. There were three cases of cycles of chemotherapy and were not included for the contralateral breast carcinoma in the AC group com- evaluation of recurrence, survival and toxicity. The pared with two cases in the CMF group.
treatment groups were reasonably similar with respect The 5-year recurrence free survival rates for sub- to baseline characteristics, such as age, type of sur- groups such as age (younger than 35 or 35 years or gery, additional radiotherapy, tumor stage, number of older), tumor stage (T1 or T2), number of the positive positive axillary lymph nodes, and status of estrogen axillary lymph nodes (1–3, 4 –9, or Ն 10), average rel- ative dose intensity (Ͻ 0.8 or Ն 0.8) and average rel-ative dose intensity of doxorubicin (Ͻ 0.8 or Ն 0.8) arelisted in Table 2. In univariate and multivariate anal- Drug Dosages
ysis, both tumor stage and the number of positive Fifty-five patients treated with AC and 69 patients lymph nodes were significant prognostic factors.
treated with CMF completed 6 cycles of chemother-apy. The average relative dose intensity for the drugs Survival
in AC was 0.81 Ϯ 0.08, and the average relative dose Six patients on the AC arm died compared with nine intensity of doxorubicin was 0.83 Ϯ 0.08. The average patients on the CMF arm. All these patients died of relative dose intensity for the drugs in CMF was 0.86 disease progression. The 5-year survival rates were Ϯ 0.10. The average relative dose intensity for the 90% (95% confidence interval, 86 –94%) and 86% (95% drugs in AC was significantly lower than that of CMF confidence interval, 82–90%), respectively (P ϭ 0.96; Fig. 2). The 5-year survival rates for the subgroups are 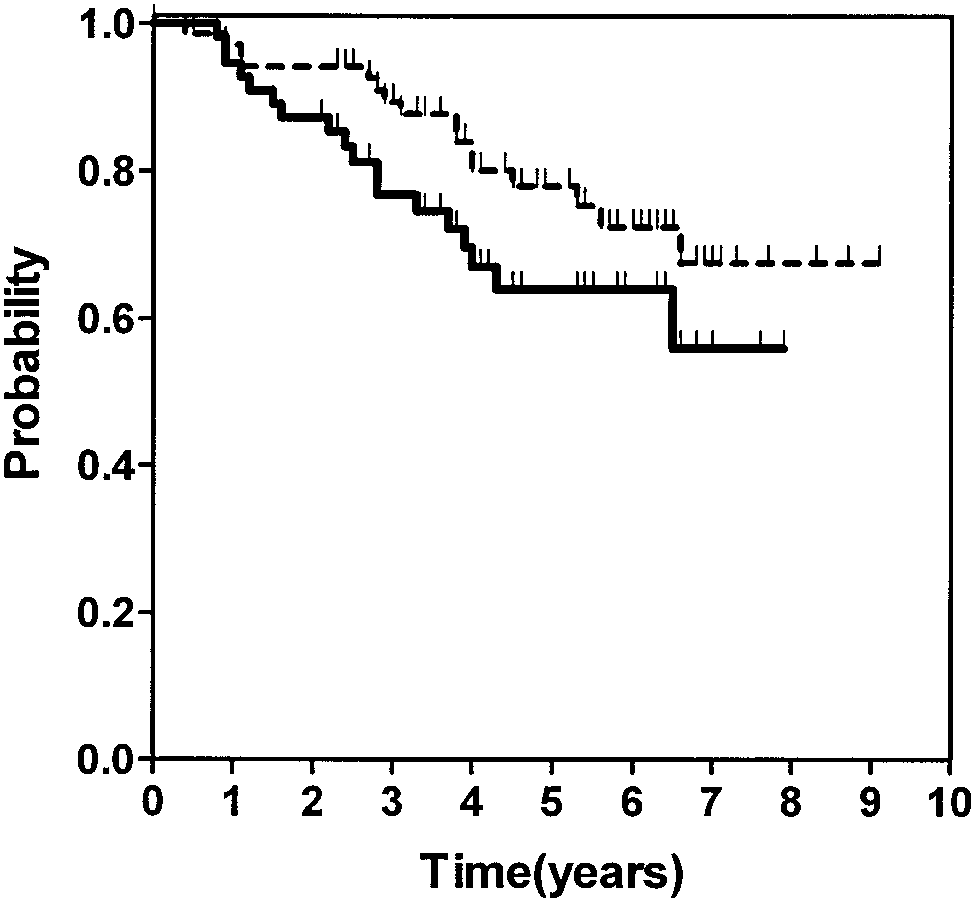