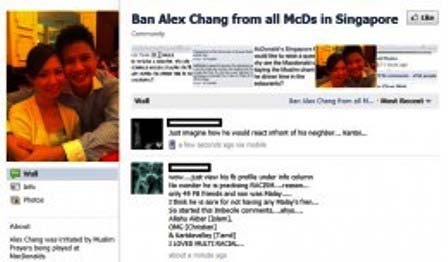 Authoritarianism and the Digital Lynch Mob
Above: The Facebook page that attacks Alex Chang over his remarks on the Muslim cal for prayer in Social media has had a transformative effect on the way people communicate and interact with each other. There have been many positive effects of digital media such as the increasing democratization of issues. People can use these platforms to make their views heard and mobilize for The Arab Spring is one such example where social media such as Facebook has been crucial in mobilizing outrage against an oppressive regime. Closer to home, the internet has been crucial to countering state controlled news in the Malaysian election in 2008 and the recent Singapore elections in Unfortunately, as with any other tool, social media can be used for both positive and negative purposes. A phenomenon, which is increasingly Contrast to the use of social media for democratic discussion and reasoning, the digital lynch mob seeks to only punish and humiliate. An early example for this is the online media platform of The Straits Times, STOMP Many posters to this media act as ‘moral police’ posting examples of what they considered to be ‘immoral’ behavior of Singaporeans. This often includes couples kissing in public areas and people not giving up seats in MRTs. These inane and petty acts of voyeurism are somehow disguised under the respectable cover of ‘citizen journalism’ when a more appropriate name for this platform should be SNITCH. However, the relative effects of this public institutionalized bitching seem relatively benign in comparison to the more recent examples of digital lynch mobs. One example of such was Wang Peng Fei, a foreign Chinese student studying at a local institution who did a comic act on YouTube. The act grated some nerves and someone made a police report against Wang. Panicking, he left Singapore and was subsequently expelled by his school. Although his act could be said by some to be in poor taste, the backlash against him could be said to be rather extreme, considering it was not meant to be taken seriously and such acts are routinely done by local But the worst case of the digital lynch mob so far has to be the case against someone who made some remarks expressing his annoyance at the Muslim call to prayer at a public place. His choice of words was extremely poor, However, his words can be taken more of ignorance rather than spite, and the issue is a broader one, regarding the place of religion in a secular society. This is also not the first time MacDonald’s has been involved in such a controversy, having withdrawn pig plush toys earlier in fear of offending The response against him however is shameful on so many levels and epitomizes the digital lynch mob. A website entitled ‘Ban Alex Chang from all McD’s in Singapore’ was set up and soon got more than 10,000 likes. It initial y ominously mentioned where he worked and promised to ‘make him However, many Muslims themselves went on the site to condemn it. The creators ignored the Ramadan spirit of patience and empathy and made it as if having the azan in a public secular space so everyone knew what time to break their fast, was the most important thing. The creators then realized they were offending their fellow Muslims and restarted the page on a less confrontational note, but was now heavily moderated. It also labeled those who disagreed with them as ‘racist’ or 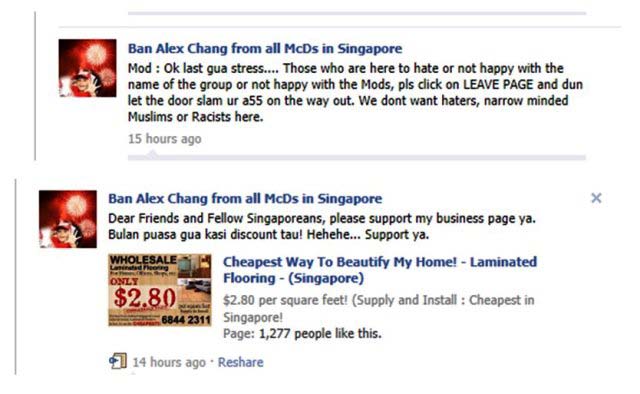 But the worst was that having made a furor and attracted attention through this storm in a teacup, the creators tried to take advantage of the situation by promoting their business on the page. So it kicked up a fuss by stirring what essentially could have been settled rationally and having done so, sought to take personal advantage of the situation. Above: The comments by the page’s moderator(s) silencing opposing sentiments and promoting their
Boon to authoritarianism
These three examples differ in their level of vindictiveness, but they il ustrate the use of the anonymity of the web to ‘rouse’ public anger, a These should be differentiated from democratic use of online media, in that unlike more democratic usage that aims to educate the public on issues, these only serve to punish and humiliate. Take the last example. There are several ways to interpret this. One is the issue of ignorance amongst non-Muslims about Muslim rituals. An educative stance would have titled the site differently, perhaps as ‘Educating non-Muslims about Ramadan’. This could have been more informative as a site to educate people who would have been otherwise ignorant. The issue could also have been about religion in a multicultural yet secular space. It could also be a way to clear up non-Muslim misconceptions about supposed ‘Muslim’ privileges, which many in the disenfranchised majority The site itself may claim otherwise, but by choosing such a vindictive title, it has closed off discussions and transmuted public issues into personal vendetta and personal gain under the guise of ‘one people, one nation, one Singapore’. The discerning public is not easily fooled. Such a stance underlies a deeply authoritarian psyche. By desiring to humiliate what is essentially a powerless target, it takes its moral authority as a given and deems itself fit to act as judge, jury and executioner. This is further reflected in the third example as it essentially deleted the deluge of disgust and dissent posted by many irate Muslims and non-Muslims. Those who harness the digital lynch mob are also essential y cowardly as by putting the focus of attention on the victim, the accusers themselves deflect scrutiny. In al three examples, we see the victim of the mob, but never the This cowardliness also needs to be emphasized in that the target is generally ordinary people, rather than the scrutiny of the powerful, which real citizen’s journalism exposes. If anything, this digital lynch mob is an aid to authoritarian governments by creating a panopticon gazing on the actions of This is not to cal for the suppression of the Internet due to the digital lynch mob. If anything, the last example shows that the denizens of the Internet can police themselves through means of reasoning and moral suasion. However, such cases of online harassment have to be taken to task in a just manner. Acting anonymously should not equate with acting irresponsibly. Those who would like to highlight issues should focus on principles rather
The digital lynch mob in context
The digital lynch mob however should also be put into its proper social context. While not excusing the general incorrigibility of those who rouse the lynch mob, the question of why the lynch mob can be so easily roused An answer should take into account the general repressive climate offline. As the discursive climate through traditional media, publications and general associations is severely curtailed, issues and frustrations are taken online The issue of Wang, for example, can be seen as outlet for frustrations by locals against foreigners, and the issue of Alex can be seen as an outlet of frustrations of a marginalized minority. This is made worse as the recent ‘curry’ issue demonstrates the inability of official bureaucratic mediators to use mandated idealized assumptions to solve disputes. We cannot merely use the clichéd tropes of multiculturalism An increasingly complex world needs greater room for critical discourse and sensitivity to nuances offline to ensure that frustrations do not translate to a This article was first published in The Online Citizen, 21 August 2011.