ORIGINAL ARTICLE: HEPATOLOGY AND NUTRITION Performing Kasai Portoenterostomy Beyond 60 Days of Life Is Not Necessarily Associated With a Worse Outcome K.K.Y. Wong, P.H.Y. Chung, I.H.Y. Chan, L.C.L. Lan, and P.K.H. Tam until now, this disease was still the most common indication for The introduction of Kasai portoenterostomy has dramatically improved the liver transplantation in pediatric patients. Various factors have been management and survival of children with biliary atresia. The success rate of suggested to correlate with long-term success of the Kasai oper- this operation worldwide varies with different centers. In this respect, many ation. These factors include the timing of surgery, the experience of authors have studied the correlation of a successful outcome with various the surgical center, and the type of anatomical defect Of these, factors, such as the experience and workload of the surgical center, the use of many authors believe that early operation before 60 days of life postoperative steroids, the underlying biliary anatomy, as well as the age of contributes to a higher success rate In this respect, some patients at the time of the operation. Indeed, the age of 60 days has been used clinicians would refer patients directly for liver transplant without by clinicians as a critical time beyond which the rate of success of the Kasai even attempting the Kasai procedure if the child presents late.
operation markedly reduces. Despite this worldwide adoption, clear evi- However, this belief is being challenged recently because studies dence supporting this critical operative time is still lacking. We undertook a have failed to show any significant difference in terms of successful review of our experience in the management of children with biliary atresia outcomes between patients who had early or late Kasai operation and focused specifically on the issue of the timing of operation. We showed Although these studies suggested that late operation was that performing the Kasai operation beyond the age of 60 days was not not necessarily a negative predictive factor, the best timing for the associated with a worse outcome and that a high percentage of patients could Kasai operation to achieve a better outcome was not determined.
still achieve good bile flow with normal bilirubin postoperatively. Thus, we Furthermore, according to the etiological homogeneity, patients believe that until the age of 100 days, the age of the patients does not play a who belong to developmental BA, including biliary atresia splenic significant role in determining the success of the Kasai operation.
malformation and cystic biliary atresia, may be of a different Key Words: age, biliary atresia, Kasai, liver transplantation, outcome category from the majority with isolated BA and have a differentprognosis The aim of this study was to analyze the outcomesof patients with isolated BA at various age groups after Kasai operation in our center based on our 28 years of experience.
Biliary atresia (BA) is the most common surgical cause of neonatal cholestatic jaundice and is characterized by an A retrospective single-center study was carried out between inflammatory process, which leads to progressively sclerosing 1980 and 2008. Medical records of all of the patients who under- obliteration of the bile ducts. Various postulations on the etiology went Kasai operation for BA in our hospital during the study period of this disease exist and these include ductal malformation, virus- were reviewed. During the study period, all of the operations were mediated inflammation, genetic predisposition, and autoimmunity carried out by a single team of experienced surgeons, after the In the past, this condition invariably resulted in liver cirrhosis, definitive diagnosis was confirmed with operative cholangiogram.
eventual end-stage liver failure, and subsequent demise of the The procedure was similar to that described by Kasai. Briefly after proper retraction to reveal the portal anatomy, dissection of the Since its description in 1957, the Kasai operation has portal tract was carried out from the distal common bile duct remained the treatment of choice for infants with BA, with a remnant up toward the portahepatitis until the level of the portal dramatic improvement in the survival of patients with this condition vein bifurcation was reached. The 2 to 3 small venules arising from The operation consists of the excision of the obliterated the posterior surface of the portal vein bifurcation were ligated and extrahepatic biliary tract, followed by portoenteric anastomosis divided to maximize the portal area. The biliary remnant was then However, despite the restoration of bile drainage, the long- excised. Bleeding at the portal surface was controlled with direct term success rate, defined as preservation of liver function without pressure only, with no diathermy used. Portoenterostomy was the need for transplantation, is only about 25% to 40% Up performed retrocolically with a 40-cm jejunal Roux loop. Post-operatively, liver functions were monitored by regular blood Received June 24, 2009; accepted May 19, 2010.
sampling. From 2004 onward, the routine usage of steroid after From the Department of Surgery, LKS Faculty of Medicine, University of Kasai operation was started. Patients would receive prednisolone at an initial dose at 4 mg Á kgÀ1 Á dayÀ1 on day 7 after the operation for Address correspondence and reprint requests to Dr Kenneth Wong, PhD, 2 weeks. The dose was reduced to 2 mg Á kgÀ1 Á dayÀ1 for another FRCSEd, FHKAM, Department of Surgery, University of Hong Kong, 2 weeks and finally 1 mg Á kgÀ1 Á dayÀ1 for the last 2 weeks.
Queen Mary Hospital, Pokfulam Rd, Hong Kong SAR, China (e-mail: Eighteen patients in our series received postoperative steroid according to this protocol. Successful outcome in this study was The authors have no conflicts of interest for this article.
defined as the clearance of jaundice (>20 mmol/L) without the need Copyright # 2010 by European Society for Pediatric Gastroenterology, Hepatology, and Nutrition and North American Society for Pediatric for liver transplantation within the first year after the operation.
Gastroenterology, Hepatology, and Nutrition Cumulative survival was calculated up to March 2009. Liver biopsies were taken at the time of the Kasai operation. These were JPGN  Volume 51, Number 5, November 2010 Copyright 2010 by ESPGHAN and NASPGHAN. Unauthorized reproduction of this article is prohibited. 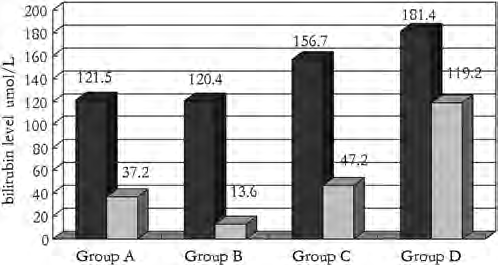 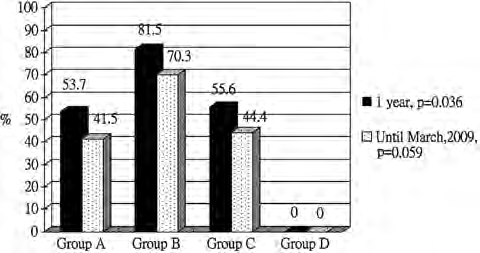 JPGN  Volume 51, Number 5, November 2010 fixed in formalin and stained for reticulin for the assessment of thedegree of fibrosis. Briefly, sections were oxidized in acidifiedpotassium permanganate and then decolorized with 2% oxalic acid.
They were then immersed in 4% iron alum before impregnating inammoniacal silver solution and before counterstaining with neutralred. The sections were examined by a pediatric pathologist who wasblinded to the eventual outcome of the patients.
All of the patients were followed up at the outpatient department regularly unless they had undergone liver transplan-tation. The demographic data, including sex, age at diagnosis andoperation, and pre- and postoperative bilirubin levels, were notedand analyzed. All of the patients were divided into 4 groupsaccording to their age at operation (group A: on or before 60 days;group B: between 61 and 80 days; group C: between 81 and 100days; and group D: on or after 101 days). Correlation between age of FIGURE 1. Mean preoperative and postoperative (6 months operation and outcome was made. Statistical analysis was done after Kasai operation) bilirubin levels of patients who under- using chi-square test and Kruskal-Wallis test. A P value of <0.05 went Kasai operation at various ages (group A ¼ <60 days; was considered to be statistically significant.
group B ¼ 61–80 days; group C ¼ 81–100 days; and groupD ¼ >100 days). P < 0.05 comparing preoperative levels forall groups, whereas P ¼ 0.05 for postoperative bilirubin levels Kasai operations were performed on a total of 103 patients (45 boys and 58 girls) during the study period. All except 3 patientswere Chinese. Five patients were found to have concomitant cystic age) showed marked hepatitis and hepatic fibrosis with features of malformation, with the rest (n ¼ 98) belonging to isolated BA. A total of 12 patients were lost to follow-up and thus excluded fromthis study. The median time of follow-up was 96.8 months (range7 months–19 years).
For the 91 patients whose data were available, there were 41 The introduction of the Kasai operation has revolutionized (45.1%) patients in group A (operated <60 days), 27 (29.7%) in the treatment of BA. Nonetheless, despite advances in surgical group B (operated between 61 and 80 days), 18 (19.8%) in group C techniques during the past decades, the results of the Kasai oper- (operated between 81 and 100 days), and 5 (5.4%) in group D ation are still variable across different centers. As a result, many (operated >100 days). The earliest time for Kasai operation was patients still eventually require liver transplantation. Various peri- done on a 34-day-old child, whereas the oldest child had the operative factors have been studied for the association with suc- cessful outcome. Initial studies suggested that early surgery could The bilirubin level preoperatively correlated with the timing lead to good outcomes Furthermore, Kasai et al of the operation, when groups A and B were compared against emphasized the importance of early operation, concluding from group C or D, the mean preoperative bilirubin level being their 1971–1977 series that 60 days of age was the critical time for 121 Æ 20 mmol/L in group A, 121 Æ 32 mmol/L in group B, operation and a 10-day delay resulted in a decrease in success rate 157 Æ 19 mmol/L in group C, and 181 Æ 32 mmol/L in group D, by half. Mieli-Vergani et al reported good bile flow in 86% of respectively (P < 0.05). On the contrary, the mean bilirubin level at infants treated by Kasai operation before 8 weeks of age, compared 6 months after operation was 37 Æ 12 mmol/L in group A, with 36% in older infants. The rally for early surgery for BA 14 Æ 5 mmol/L in group B, 47 Æ 8 mmol/L in group C, and continued into the 1990s Subsequently, Altman et al concluded from his multivariate analysis that operation on or before The overall success rate of Kasai operation (as defined by the 49 days could achieve the best result, whereas operation beyond need for transplantation within 1 year) was 59.3% in our series.
When we stratified this into different groups, a successful outcomewas seen in 22 patients (53.7%) in group A, 22 patients (81.5%) ingroup B, and 10 patients (55.6%) in group C, whereas none of thepatients in group D had a successful outcome (P ¼ 0.036). Regard-ing long-term prognosis, patients from group B had the best out-come again with 19 patients (70.3%) surviving with native liver. Forgroups A and C, 17 patients (41.5%) and 8 patients (44.4%)survived with their native livers, respectively (P ¼ 0.059) We next looked at histological differences in terms of the degree of liver fibrosis and cirrhosis in the various groups ofpatients. This is an important comparison because many authorshave argued that patients who require operation earlier mayrepresent a distinct subgroup, and therefore would present withcirrhosis earlier. Here, samples taken from patients in groups A, B,and C showed features compatible with extrahepatic biliary cho-lestasis and proliferation of bile ductules. However, there was no FIGURE 2. The percentage of patients in groups A, B, C, and D objective difference in terms of the degree of fibrosis of periportal after Kasai operation who had survived with native livers at tract, and none of our patients had cirrhosis at the time of operation 1 year after operation (P ¼ 0.036) and as documented until Samples taken from group D patients (Kasai >100 days of Copyright 2010 by ESPGHAN and NASPGHAN. Unauthorized reproduction of this article is prohibited. 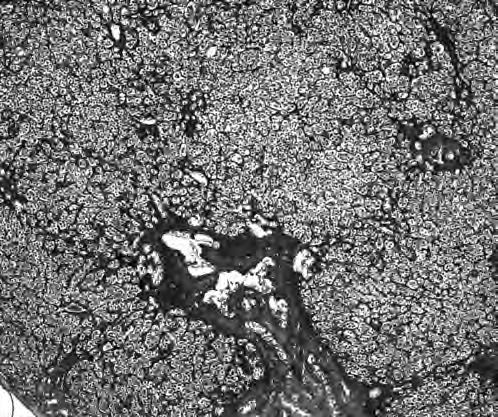 IB German SL Curriculum Introduction: The Language B program is a foreign language learning program designed for study at both higher and standard levels by students with some previous experience of learning the language. The main focus of the program is on language acquisition and development. This program meets the needs of IB students who have already studied the German language. La

MEDICATION LIST Please avoid Aspirin and other non-steroidal anti-inflammatory drugs such as Motrin and Aleve, as these can cause excessive bleeding. If you are on anticoagulants/blood thinner such as Coumadin (Warfarin) and Plavix (Clopidogrel) you must inform the performing surgeon. In addition to Aspirin-like medications, Vitamin E and many herbal supplements need to be stopped such as Ga