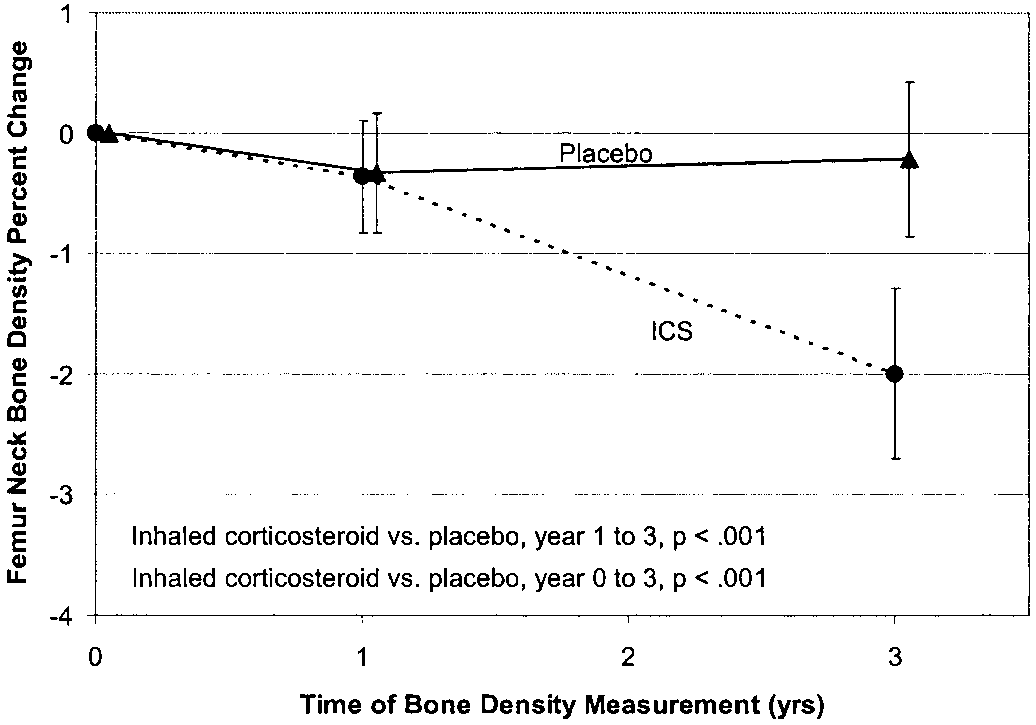 Scanlon, Connett, Wise, et al.: Loss of Bone Density in LHS II TABLE 4. RESULTS OF MULTIVARIATE ANALYSES* OF DRUG
EFFECTS ON PERCENT CHANGES IN BONE DENSITY FROM
BASELINE TO YEAR 3
Figure 1. Changes in bone mineral density (BMD) of femoral neck at
Year 1 and Year 3, expressed as percentage change from baseline. Error Definition of abbreviations: ICS ϭ inhaled glucocorticosteroids.
bars represent 2 SEs. Closed circles indicate inhaled glucocorticosteroids Multivariate analysis of effects of various characteristics on percent changes in (ICS) group; closed triangles indicate placebo group.
bone mineral density of femoral neck and lumbar spine from baseline to Year 3.
The model was calculated as a stepwise regression using treatment assignment,age group, sex, cigarettes per day, calcium use, vitamin D use, and multivitaminuse. Significant predictors are shown with effect size expressed as percentage 0.11 (p Ͻ 0.001 compared with baseline, p ϭ 0.004 compared with change in bone mineral density; p values are for comparisons shown.
* Results of General Linear Model procedure.
We analyzed the effect of drug adherence on changes in lumbar spine BMD (Table 3). The ICS participants who usednine or more puffs per day showed a significantly lower lumbarspine BMD (Ϫ2.15%, p ϭ 0.003). The numbers of participants given short courses of OCS as part of their medical care (34 ICS in the lower adherence subgroups were small, and no significant and 34 placebo). We found no difference between those who used OCS and those who did not. After controlling for OCS, A multivariate analysis (Table 4) showed that in addition to the medication effect of ICS on BMD was significant at both the effect of the medication, women had a greater loss of spine the femoral neck (p Ͻ 0.001) and the spine (p ϭ 0.011).
BMD than men did. Participants who were older than the median More participants in the ICS group than the placebo group age of 56 years had a greater increase in spine BMD. Smoking (11 ICS vs. 2 placebo) used thyroid replacement. Participants appeared to have a deleterious effect in proportion to number in the ICS group who used thyroid replacement had a slightly of cigarettes smoked at baseline (p ϭ 0.056). Baseline spine (but not significantly) greater BMD loss in both femur and spine BMD and the use of estrogen, vitamin D, calcium, and multivita- than those who did not. When we reanalyzed the changes in mins were not predictors of change in spine BMD.
femoral and spinal BMD excluding participants using thyroid No difference was observed between the ICS group and the replacement therapy, the results were unchanged, and the differ- placebo group in the number of participants with spine BMD below ences from baseline to Year 3 remained significant (p Ͻ 0.001 the fifth percentile or with a decline of 6% or more at 3 years.
for femoral neck, p ϭ 0.0121 for spine).
Self-reported physical activity levels (no regular exercise, Other Factors Considered in Analysis of BMD
moderate, vigorous) had no effect on femoral or spinal BMD.
At the beginning of the study, we excluded potential participants After controlling for baseline physical activity, the effect of ICS who reported recent use of oral or systemic glucocorticosteroids on BMD was unchanged and still significant (p Ͻ 0.001 for (OCS). During the course of the study, some participants were femoral neck and p ϭ 0.016 for spine).
TABLE 3. PERCENTAGE CHANGES IN BONE MINERAL DENSITY FROM BASELINE TO YEAR 3 BY DRUG GROUP
AND BY AVERAGE PUFFS PER DAY
Definition of abbreviations: BMD ϭ bone mineral density; ICS ϭ inhaled glucocorticosteroids; PLAC ϭ placebo.
Percentage changes in bone mineral density of femoral neck and lumbar spine among participants with different levels of treatment adherence from baseline to Year 3. Data are expressed as mean Ϯ SD; p values compare ICS and placebo users. 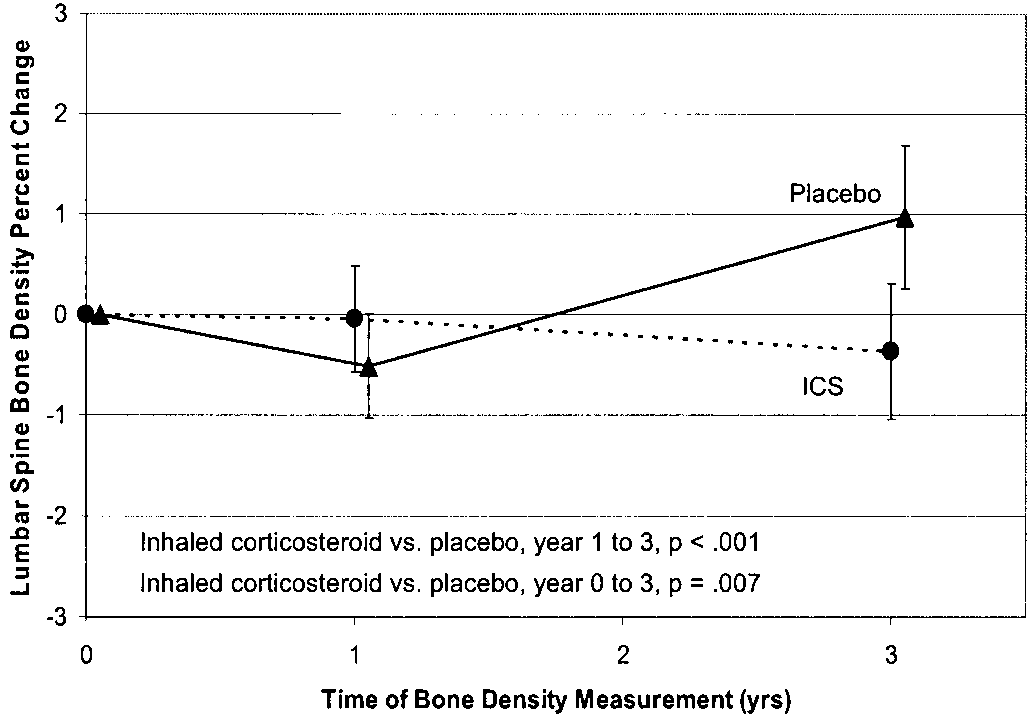 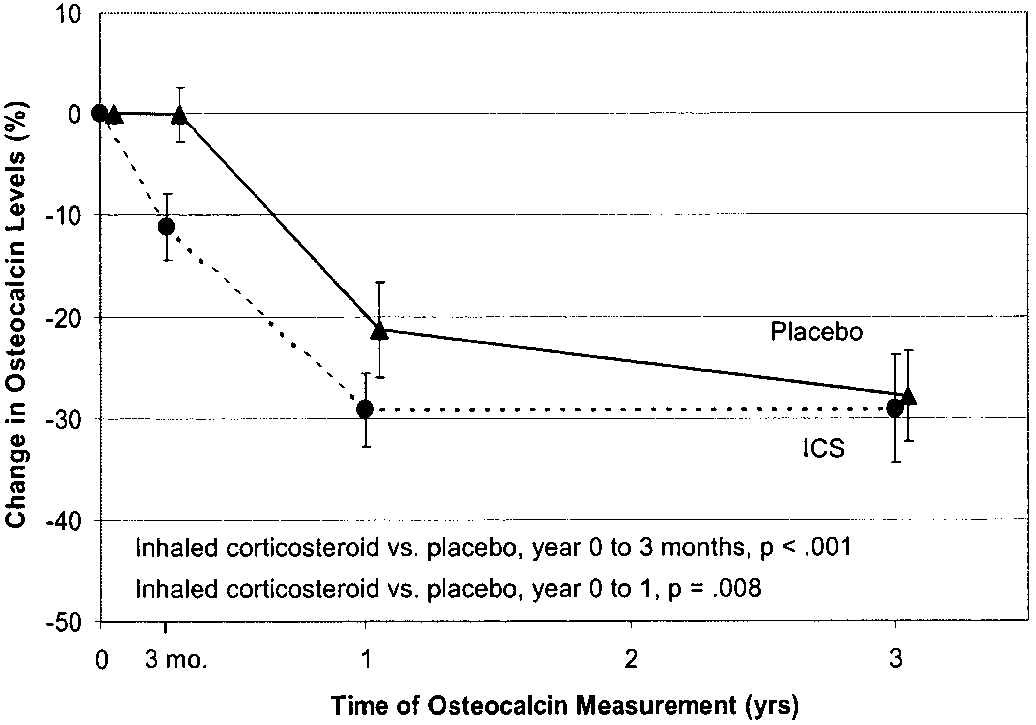