Background for the Project
Because school-age children spend much of their time away from home, the children
need to be able to recognize early asthma warning signs to begin asthma prevention,
get help from other adults like teachers and coaches when they are having asthma
symptoms, and becoming more aware of asthma triggers and ways to avoid triggers.
We recognize that parents are their children’s first and most important teachers. So in
the ACT Project the focus for the parents was to provide them with tools and information
they can use as they help their child learn to manage their asthma.

Participants
Dripping Springs ISD, Wimberley ISD, and UT Elementary School participated in the
first year of this project. A total of 28 children in grades 2-5 took part in the first year.
There were 15 girls and 13 boys who were an average age of 9.2 years. We had 14
children who are White, 5 who are African American, and 9 who are Hispanic. A small
majority of the children (64%) came from a 2-parent home, and 36% came from a single
parent home. Over half of the children (57%) were diagnosed with asthma by the age of
2, another fourth were diagnosed by the age of 5, and the rest were diagnosed after 5-
years of age.

Asthma Self-Care
Medications: Six of the children (21%) only had their medication at home, while 22
(79%) had their medication both at home and school. Sixteen children (57%) had a
quick-relief medication such as Albuterol or Proventil prescribed by their physicians.
Nine children (32%) had an inhaled steroid medicine such as Flovent or Asmacort for
controlling asthma and inflammation.
Medical Care: In the previous year, 3 of children (11%) were seen in the Emergency
Department for asthma care and no children were hospitalized for asthma. Twenty-two
of the children (79%) had group insurance, 3 had Medicaid, and 3 had CHIP (Children’s
Health Insurance Program).
Home Care: Four of the children (14%) had peak flow meter to use before the project
began. All of the children were given a peak flow meter when they received their asthma
education.
Asthma Knowledge and Management: Children’s knowledge and management of
asthma improved from the beginning to the end of the study. 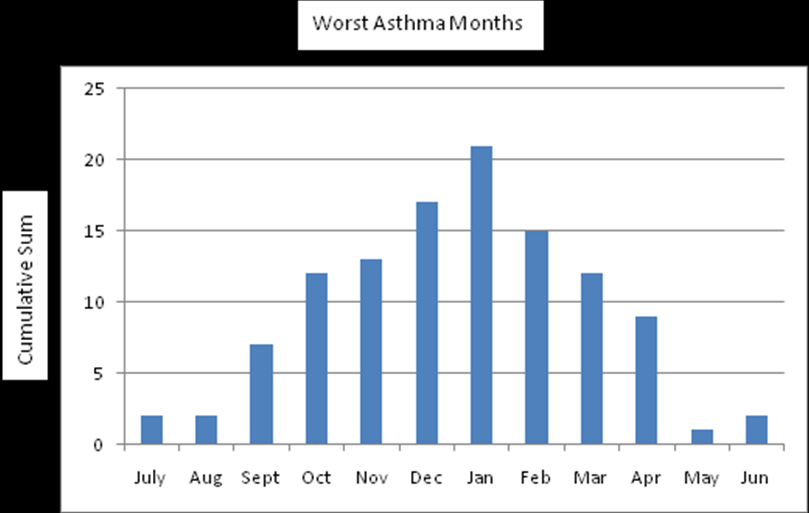 Asthma Symptoms
As seen in the box below, children have more problems with asthma during the school
year- when pollens and molds are high, and when more children in school have colds.
Children had asthma symptoms an average of 4 months a year, but the range was
1 to 7 months a year.
Allergens. Sixteen of the children (57%) had allergies. The allergens included indoor
allergens such as smoke, house dust mites, cotton, cats, dogs, feathers, wool, and
some foods. Outdoor allergens included grass, mold, weeds, cow and horse hair or
dander, and tree pollens. The most common indoor allergens were cat and dog hair that
affected 8 of the children (29%), followed by 5 children (18%) who were allergic to
house dust mites. The most common outdoor allergens were weed and tree pollen that
bothered 9 of children (32%), followed by grass that affected 8 of children (29%).
Home Environment
Six of the families (21%) had smokers in the home. Seventeen families (61%) reported
having a furry pet in the home. Of these families, 5 of the pets (18%) stayed outside, six
(21%) stayed inside, and 7 (25%) stayed in and outside of the home. One hundred
percent of the families reported having stuffed animals in the child’s room. Twenty of the
families (71%) have carpet in the child’s bedroom. Of these families, three (11%) clean
the carpet at least every two months and seventeen (61%) clean the carpet at least
once a year. Fifteen families (54%) have a dust mite cover on the child’s mattress and
pillow.
Future Plans
As we continue to increase the total number of participants, we will be able to answer
more complex questions. But the early findings are encouraging. Thank you for
participating in the study. We will send a report of the cumulative findings to you as the
study progresses.

Examples of Over-the-Counter Medical Expense Reimbursements Through Healthcare FSAs IRS Rev. Rul. 2003 – 102, September 3, 2003 The below list is not intended to be all-inclusive, but is rather to answer frequently-asked questions. This list is subject to change per IRS rulings or interpretation changes. If you have further questions, please contact Aetna FSA Member Services at 1