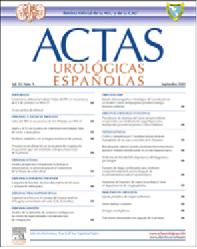 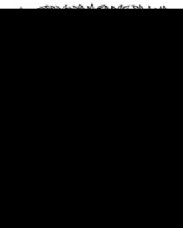 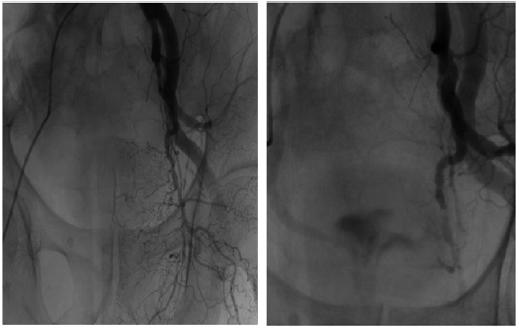 Document downloaded from http://www.elsevier.es on 18/06/2010. Copy for personal use. Transmission of this document by any means or in any format is forbidden. ACTAS UROL ESP. 2010;34(7):603–609
7. Recombinant factor VIIa
arteries, and finally small vessels that perfuse specific regions (i.e., supraselective embolization38). Such supraselective embolization has Recombinant coagulation factor VIIa favors fibrin clot formation at the made it possible to reduce the complications of the technique. site of vascular damage, forming a complex with the exposed tissue The most frequent problem is gluteal pain (gluteal claudication), factor and acting upon the activated platelets27. Its use has been resulting from embolization of the internal iliac artery and accidentally authorized in refractory bleeding in patients with inhibitors targeted to of the superior gluteal artery. Lower extremity necrosis has also been factors VIII and IX, in factor VII deficiency, and in Glanzmann described, secondary to migration of the occluding material, as well as thrombasthenia. This treatment has been reported to be effective in bladder wall necrosis, and rarely lower limb paraplegia due to patients with thrombocytopenia and platelet disorders, bleeding embolization of spinal arteries – with the consequent spinal cord associated with oral anticoagulation, severe traumatisms and liver diseases28, as well as in cases of severe bleeding in adult patients without The advantages of the technique are that it can be carried out under congenital coagulopathy or inhibitor development29. local anesthesia, and posterior treatment modalities are not conditioned Few randomized clinical trials have been published on the variety of uses of such therapy, and most publications correspond to clinical notes with small sample sizes. Scarpelini and Rizoli published a review on the use of recombinant factor VIIa (rFVIIa) in the different surgical areas – 10. Helmstein balloon distension
reporting a decrease in preoperative bleeding in the context of retropubic radical prostatectomy, after administering 20–40µg/kg of recombinant In 1966, Helmstein successfully used hydrostatic pressure therapy in factor VIIa30. However, in the mentioned study, the blood losses in the bladder tumor treatment, inducing tissue necrosis through compression control group were considerably higher than those considered acceptable in 27 of the 35 patients described40. He later proposed the same method The successful use of this treatment after radiotherapy has been Most of the series published in relation to this technique date back to reported in the gynecological setting31, when all other measures had before 1980. It is globally described as useful, simple, with few side effects, but offering only temporary action. Candidates for treatment with rFVIIa must meet the following The technique involves fitting a specifically designed balloon (a normal hematological criteria32: hematocrit > 24%; fibrinogen 50–100 mg/dl; balloon or condom can be used) to the sectioned extremity of a no. 18 platelet count > 50,000 x 109; and pH >7.2. In addition, administration Foley catheter. Under epidural anesthesia (in order to eliminate bladder must adhere to a series of clinical intervention measures33. The request for recombinant factor VIIa as treatment for radiation- induced cystitis falls within the category of “compassionate drug use”. The recommended dose is 90 µg/kg, and a second dose may be administered after 20 minutes if the desired effect is not achieved. A further number of doses has not been shown to be effective. Physical measures

A history of tuberculosis