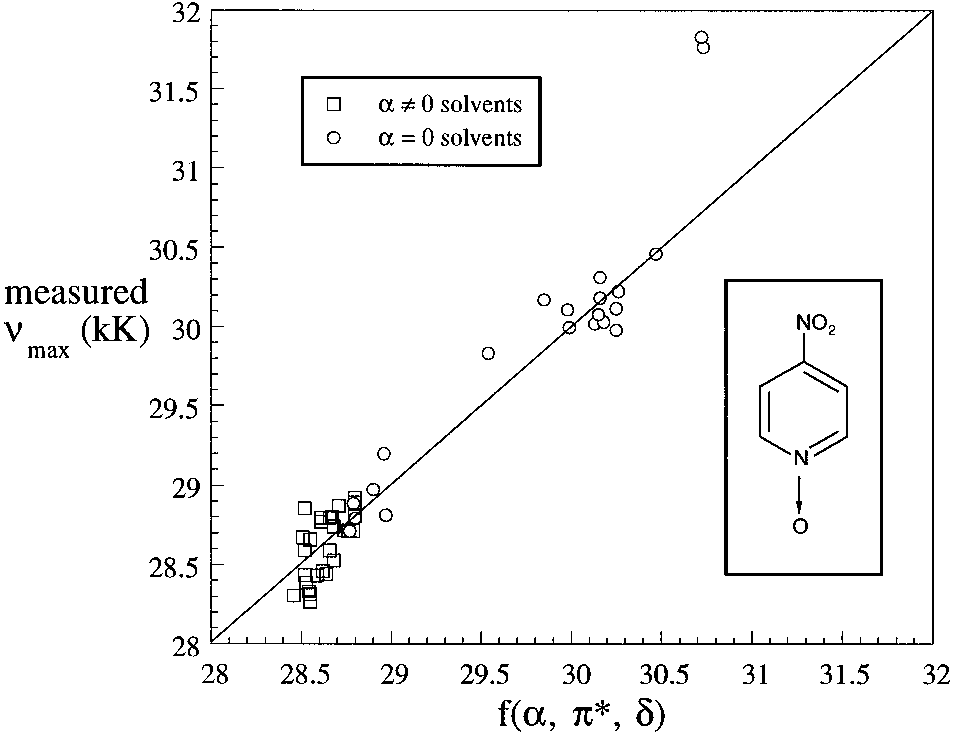 J. Org. Chem., Vol. 61, No. 18, 1996 According to the Franck Condon principle, although the dipole moments of the excited state, µe, and groundstate, µg, are different, the positions of the nuclei of theexcited state solute and the nuclei of the surroundingsolvent molecules should not change on the time scale ofthe electronic transition. The dipole moment of 4-nitro-pyridine N-oxide in the ground state was calculated tobe 0.09 D.14 The hypsochromic band shift observed insolvents capable of hydrogen-bonding can be attributedto the increased stabilization of the electronic groundstate relative to the excited state of 4-nitropyridineN-oxide (µg Figure 1. Linear correlation of the experimental UV/vis
Considering all LFER equations, we recommend that absorption maxima and the predicted values according to eq 3. Points for solvents 47 and 48 are included in the plot, but
N-oxide as a probe. Both the π* and not in the regression equation. The inset shows the chemical to the measured transition maxima in solution; however, structure of 4-nitropyridine N-oxide.
transition maxima appears to also depend on solvent positive charge at the pyridinium nitrogen is resonance class, addition of the δ term appears to correct for the delocalized about the ring for poorer electron acceptor polarizability of the solvent classes and is not an ability of the probe. A LFER using solely additional experimentally determined quantity. In com- the independent variables, as in eq 4, results in separate parison to the aforementioned results obtained for pyri- LFERs among the solvent classes measured. Therefore, dine N-oxide, 4-nitropyridine N-oxide possesses a solva- inclusion of the δ term in eq 3 was deemed necessary to tochromic effect that is located in the long wavelength account for the variation in polarizability among the various solvent classes. The correlation is graphically making it a viable probe for hydrogen-bond donation The a/s coefficient ratio in eq 3 is 9.42 indicating that the hydrogen-bond donor ability of the solvent is the Acknowledgment. A.L. wishes to acknowledge the
predominant solute/solvent interaction on the solvato- financial support of the Professional Research Experi- chromic activity of 4-nitropyridine N-oxide.
ence Program at the National Institute of Standards and manifest in the relative insensitivity of the position of the peak maximum of the π f π* transition13 to the solvents incapable of hydrogen-bond donation. In fact,a good correlation exists for the solvents capable of (14) Lazzeretti, P.; Malagoli, M.; Turci, L.; Zanasi, R. J. Mol. Struct. 1993, 288, 255.
(15) Reichardt, C. In Solvent and Solvent Effects in Organic (13) Pierre, M.; Baldeck, P. L.; Block, D.; Georges, R.; Trommsdorff, Chemistry, 2nd ed.; VCH: Weinheim, Germany, 1988.
H. P. Chem. Phys. 1991, 156, 103.
(16) Marcus, Y. Chem. Soc. Rev. 1993, 22, 409.