Carrot and stick – what’s the effect?
One measure is often proposed when someone wants a different behavior from somebody else: To
use carrot and stick – or to use it more consistently.
In the beginning of the 1990’s, the carrot-and-stick measure was proposed in the prison system of
England and Wales. Come 1995, it was put into practice under the name “Incentives and Earned
Privileges”, or IEP for short. With IEP, all prisons were to define three levels of privilege for
inmates. On the basic level, inmates solely enjoy the benefits and rights entailed by the law.
Adhering to rules and behaving constructively, a prisoner may gain access to either the standard or
the enhanced level. There, he or she may benefit from:
• Wearing own clothes (instead of prison clothing) As may be expected, a philosopher has fathered this way of thinking. English Jeremy Bentham thought that all creatures will seek to obtain pleasure and avoid pain. He found that this could be used to make even a donkey behave as wanted, using the carrot for pleasure and the stick for pain. No matter Bentham’s thinking, some things are required for the pleasure-and-pain philosophy to work in real life. First, it is necessary to actually have a carrot and a stick. If an inmate has nothing to lose, no stick can be used to punish him. For instance, if he is not in contact with people outside prison, the threat of taking away his visits cannot be used as a stick. Vice-versa, visits in more pleasant surroundings cannot be used as a carrot. Second, the carrot and stick has to have the effects intended. This may not give rise to problems when using the philosophy on donkeys, but humans often differ in their tastes. Some cannot endure carrots, others enjoy pain. An example of differing tastes in the prison setting: some people may prefer the prison clothing to their own. Third, it must be transparent to everyone how to obtain the carrot and how to avoid the stick. This last requirement definitely posed problems for the IEP scheme. A team of researchers from the University of Cambridge saw this as they followed the implementation of IEP in five very different prisons. They saw that it is of utmost importance that prison officers use rules in the same way. If not, it may seem random whether one does in fact earn privileges when behaving well. If it seems random, prisoners do not really have an incentive to put in an effort. Carrot & stick, Nyt fra Kriminalforsorgen 08-06 As a prison officer, however, it is rather difficult to know how colleagues use rules. Two prison
officers may assess the same inmate’s behavior differently and consequently apply IEP in different
ways. For inmates, this makes it difficult to find out how to obtain the carrot or privilege – and how
to avoid the stick.
Maybe that is why IEP did not lead to better behavior among inmates at the five prisons in question.
Also, IEP did not lead to better security and order. Researchers saw that in responses from staff (in
questionnaires) and inmates (interviews). 1.000 inmates answered their questions – half of these
before the introduction of the scheme, the remainder answering after the implementation. Responses
showed that after the introduction of IEP, staff’s conduct was perceived by many inmates as less
fair and less coherent than before.
Researchers did find positive effects of the introduction of the IEP scheme, though, among staff.
Even if security did not improve, many employees felt more at ease at work. They felt more
confident and they found that they communicated better with inmates. Also, they enjoyed being
able to reward well-behaved inmates.
How about Denmark?
I do not have the data necessary for a profound comparison of the Danish and English / Welsh
prison systems, however I do think that the Danish Prison and Probation Service already enjoys the
best parts of the IEP scheme: the endowment of prison officers with greater competence and scope
in day-to-day work. Still, English and Welsh prison officers probably have less say in daily prison
life than do their Danish colleagues.
However, the Danish Prison and Probation Service probably also suffers from the same problems as
do prisons using IEP. When prison officers have competence and scope in their work, they may
apply rules in different ways. Thus, inmates may experience very different rules and conditions and
effects may vary.
Ongoing research
The Cambridge researchers are popular within the English and Welsh prison service, even if they
did not speak highly of the IEP scheme. Their research into IEP led to more tasks within the
Service, for instance looking into claims of brutality and negative culture in one prison put forward
by HM Inspectorate of Prisons. That is quite another story, though.

The article is based on:
* A book, “Prisons and their Moral Performance. A Study of Values, Quality, and Prison Life
(Clarendon Studies in Criminology)” by Alison Liebling and Helen Arnold. It was published in 2004 and can be found on Amazon.co.uk. * An article, ”Incentives and Earned Privileges for Prisoners – an evaluation” written by Alison Liebling, Grant Muir, Gerry Rose & Anthony Bottoms in 1999, cf. http://www.homeoffice.gov.uk/rds/pdfs/r87.pdf Carrot & stick, Nyt fra Kriminalforsorgen 08-06 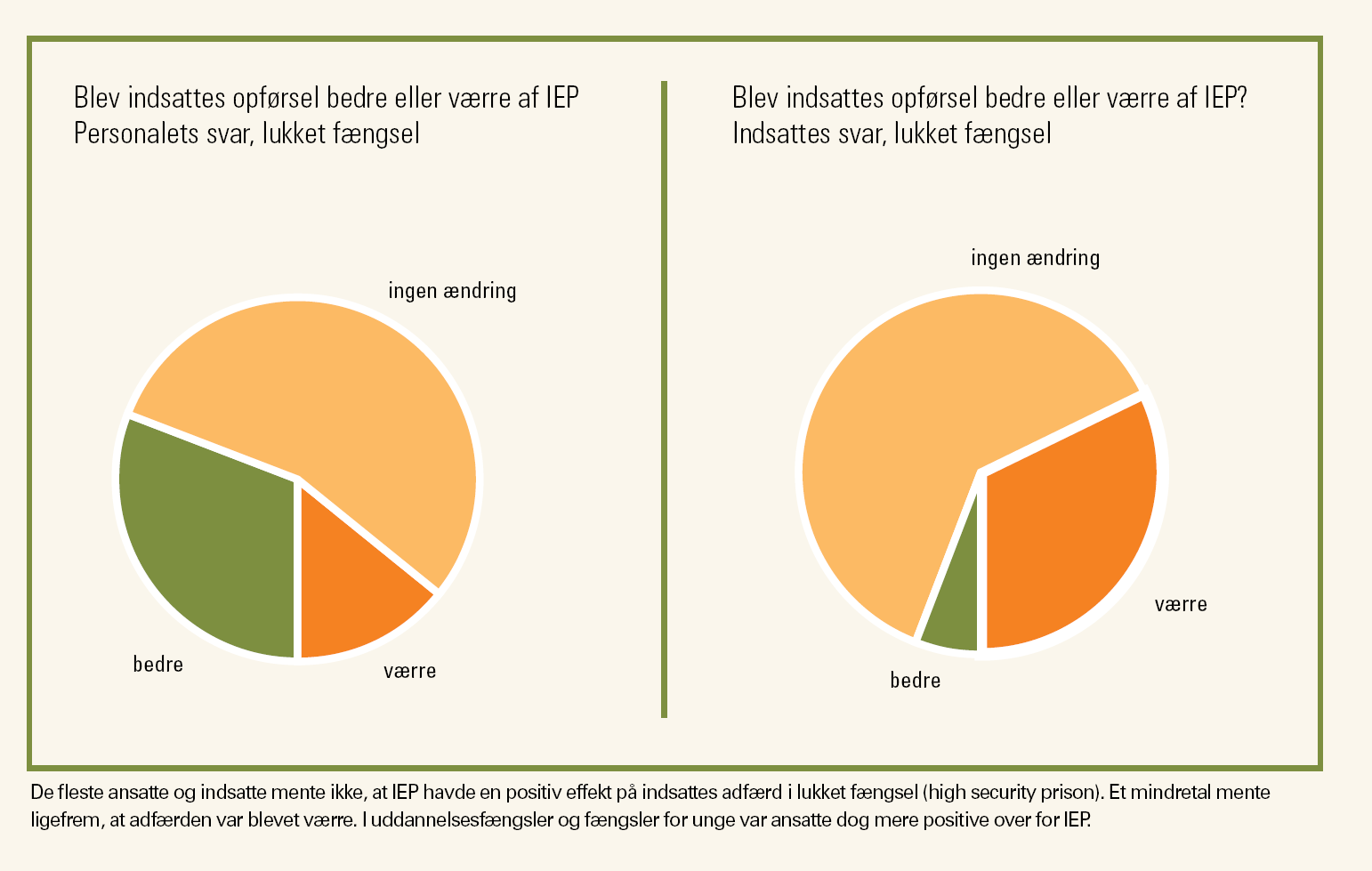 IEP and Quid pro Quo
The IEP philosophy may seem close to the Danish scheme of Quid pro Quo, but the content of the
two schemes differ rather a lot. In Quid pro Quo, inmates are to behave differently now in order to
obtain advantages in many months – for instance, early release. With the IEP scheme, the intention
is that the prisoner soon feels the effect of a change in behavior. When this works, that is.
Apart from that, the thinking behind IEP differs significantly from the Danish principle of normalization. Comparing the British-Welsh IEP with the Danish principles, it is evident that in Denmark, the prisoners’ situation after release is always (intended to be) in focus. The intention is to make it possible to live a crime-free life after release. Most employees and prisoners in high security prisons did not see a positive effect on prisoners’ behavior. A minority even found that conduct had turned worse. In training prisons and young offender institutions, though, staff was more positive towards IEP. Carrot & stick, Nyt fra Kriminalforsorgen 08-06

CVS Caremark Drug List Changes – Removal from Formulary – Rationale Effective January 2014 Note: This document is specific to the removal of drugs from the standard formulary for January 2014. This document does not address other drug list changes that are focused on non-preferred/preferred status changes. Changes will be made to the CVS Caremark standard formulary eff