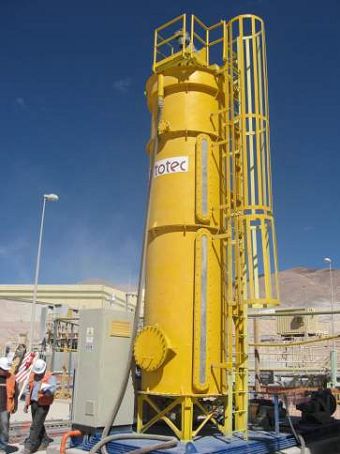 Output Australia | June 2009 | Page 9
Thickener sizing and the importance of testwork
In this current climate, with scrutinising eyes fixed firmly on the bottom line, cutting corners on the costs and effort associated with testwork at the early stages of a project may appear attractive. After all, surely relevant experience combined with some calculated guesswork, can’t go too far wrong? However, the sizing of equipment which achieves design requirements and is not conservatively oversized can influence both the financing of a project as well as its long term operational success. The following article goes back to basics, outlining the different options available in thickener sizing, from rudimentary through to highly comprehensive, and explains where each method is appropriate. Factors affecting thickener sizing and performance When planning a project that includes thickening technology, a key element in the process is determining the sizing and expected performance for the thickener(s). This information will facilitate project layout and design, as well as define capital expenditure and operational cost estimates. As thickener performance will have a direct effect on overall plant operation, Process Performance Guarantees from suppliers are generally expected. In certain cases these guarantees are a pre-requisite for the project meeting financing approval, so can be a critical element at early stages.
Thickener performance parameters, such as underflow densities and overflow clarities, and the effect of feed variables such as rise rate and solids loading rate, can vary greatly for different thickener feeds. Even for the same types of application, thickener performance will vary at different sites due to factors such as particle size, the presence of clays and organic materials, water chemistry, and the effects of upstream processes such as grind size and the use of reagents.
Other parameters, such as the optimal feedwell slurry density for efficient flocculation, and the type and dosage of flocculant will also vary from application to application. These parameters will have an effect on the project’s capital and operational costs. For example, a particular application may require additional dilution of the incoming feed stream via the use of self-diluting systems (such as Autodil or Turbodil) to add supernatant liquor from the thickener surface into the feed stream, while another application may require underflow re-circulation to seed the flocculation process due to a highly dilute thickener feed. Output Australia | June 2009 | Page 10
Depending on the stage of the project, and whether or not samples of indicative feed material are available, a number of different methods can be used to determine thickener sizing. In general, these can be classified as: rule of thumb sizing, cylinder settling tests, and, lastly, dynamic thickener testwork. These methods differ in levels of complexity and outlay (in terms of time and effort as well as cost) and correspondingly vary in their level of accuracy: Sizing is based upon experience with the particular thickening application, and is used in cases where indicative feed samples are not available, or for preliminary sizing purposes. Performance achieved at adjacent sites with similar feed types can be taken into account, if this data is available. Generally ‘rule of thumb’ sizing is utilised at the early stages of project conceptual studies and for preliminary budget pricing purposes. This method is the least accurate method of the three, as assumptions are made re feed material displaying ‘typical’ properties for that particular application, and site-specific factors (such as high clay levels) can be overlooked. For this reason, it would be unusual that a definitive supplier’s Process Performance Guarantee would be provided based upon rule of thumb sizing.
Often, due to the low level of accuracy associated with this method of sizing, it is necessary to allow for high safety factors on the sizings. This can lead to conservative sizings and therefore larger size thickeners than required, driving up project costs unnecessarily. Conversely, where feed materials display particularly poor settling characteristics, it is possible for the thickener to be undersized, leading to process performance being below specification.
These tests and the various mathematical methods developed to interpret their results (such as the Coe & Clevenger, Kynch, and Talmage & Fitch methods) were the traditional method for thickener sizing until the 1990s. These methods are a step up from rule of thumb sizing and provide more accuracy. Cylinder settling tests (or jar tests) can be conducted with a relatively small amount of indicative feed sample, less than that required for dynamic thickening testwork. From the results of cylinder settling tests, interpolations can be drawn as to the expected underflow density in the full size thickener. Optimal feedwell conditions for flocculation can also be ascertained. The downside of cylinder settling tests is the lack of accuracy compared to dynamic testwork, since they do not account for the effects present in full-scale thickening, such as the rotating mechanism. To compensate, it is again necessary to allow for additional safety factors. This is the method through which the most accurate thickener sizing and prediction of process performance is achieved.
Most reputable and experienced thickener suppliers have developed a number of dynamic testworkunits of various sizes and configurations. These dynamic test rigs are essentially scale versions of commercial thickeners, with feedwells, flocculant addition, underflow pumps, and rotating rake mechanisms to duplicate the full-scale thickening process.

Output Australia | June 2009 | Page 11
For example, Outotec carry out most dynamic testwork in a bench-scale 99mm internal diameter test rig. Other tests rigs include a 190mm internal diameter with extended wall height to simulate the additional compression in paste thickeners, and 1m diameter test units of various sidewall depths. The 190mm and larger tests rigs are used for paste thickening applications and other larger scale test campaigns.
Generally, due to the amount of sample required, paste thickening and larger scale testwork campaigns are conducted on-site. This is also the case for bench-scale testwork for feed types expected to age significantly during transport or where the water quality characteristics will affect results of testwork.
Dynamic testwork presents a number of benefits including:  Ability to accurately ascertain the relationship between feed solids loading rate and underflow density and overflow clarity, and flocculation requirements.  Any requirements for feed dilution or solids re- circulation to achieve optimal conditions for flocculation can be determined.
 The safety factors necessary with less accurate sizing methods are not required. This leads to lower costs in most cases as smaller thickeners can be specified.
 Process guarantees are available on thickeners sized using this method, thus fulfilling any requirement for guaranteed thickener process performance.
Ensuring that the most accurate testwork possible is utilised can mean the difference between achieving your desired thickener performance and ‘almost’ achieving it. ‘Almost’ achieving process targets can lead to problems such as: Ability to accurately ascertain the relationship between feed solids loading rate and underflow density and overflow clarity, and flocculation requirements.  Unnecessarily high operating costs due to non-optimised flocculant consumption.  Unacceptable thickener overflow clarity, meaning possible inability to recycle plant process  Downstream effects on other equipment in the circuit such as, for example, filter operation.
 Complications with underflow pumping or other intended transportation methods.  Problems with tailings disposal, such as unstable tailings deposition, tailings disposal volume consumed at a higher rate than envisioned, additional rehabilitation costs.
 Inadequate washing – CCD circuit.
Output Australia | June 2009 | Page 12
So, in summary, in the early stages of a project, rudimentary rule of thumb sizing can fulfil basic requirements. However, the temptation to scrimp on the costs and effort associated with testwork can have lasting ramifications. Comprehensive dynamic testwork performed on indicative feed samples ensures truly optimised thickener performance, achieving process targets and minimising operational costs. It can also avoid costly conservative oversizing, which can mean the difference between whether your project proceeds or not. As tends to be the case in life, investing a little bit of expense and effort up front can save substantial costs and avoid disappointment further down the track. _______________________________________________________________________________________________ Andrew McIntosh is currently Senior Proposals Engineer, thickening, for Outotec in Sydney, Australia. Andrew holds an Associate Diploma in Mechanical Engineering and has over 15 years experience in the minerals processing and water treatment industries. Previous roles at Outotec include working in their Design and Projects departments, as well as some months in Outotec’s Sri Lankan office on the ECTAD drinking water treatment and supply project. External roles include process plant layout design for engineering consultancies in Perth.
If you would like more information, click here to contact
[email protected]
OUTPUT AUSTRALIA EDITOR
Laura White – Marketing Manager, Minerals Processing
Tel: +61 2 9984 2500
Email: [email protected]

• Mould is a fungus that grows as a mass of microscopic threads with small lollypop like spore-producing bodies. It is present everywhere in the indoor and outdoor environment and has been in existence for millions of years. • Mould spores are abundant in the air, so they can easily infect and decay damp materials, or cause plant or animal • Mould produces both useful and poisonous chemic