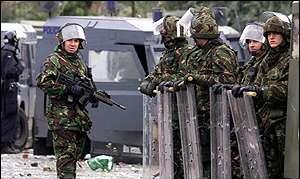 Editorial
Welcome back to BRTD for the 1st issue in long many day, as they say out the Armagh Road. So far back we can’t remember, but then again, when you’ve imbibed as much alcohol as we have, it’s no bloody wonder. Many will know that we have a presence on the internet and with regular reports on matches and some interesting articles every now and again it’s the perfect place to spend a couple of minutes if you’re too tired surfing for porn. You can find us at Although we don’t have a PO Box we can be contacted by email and would love to hear from anyone except people selling herbal Viagra and those Nigerians with business proposals. Any Shels fan that manages to get their hands on this publication of monumental proportions will find our site is a mine of information for away fans travelling to Shamrock Park for the return leg. If we get a positive response we may wel be doing another freezine soon and who knows we may manage to get off our collective hairy asses and do a proper fanzine. The Judge
Q: How does Roy McCreadie change a lighbulb? A: He holds it in the air, and the whole world revolves around him. IFA announce security measures for Irish Cup Semi-Final Q: Why do people take an instant dislike to Linfield fans? Q: What’s the difference between Roy Coyle and God? A: God doesn’t think he’s Roy Coyle. Q: Why do Glenavon fans plant potatoes round the edge of Moanview Park? A: So they have something to lift at the end of the season. Two blokes were walking through a Flanders cemetery when they chanced upon a tombstone that read: “Here lies Sammy Jamsie, a good man and a Glentoran fan.” So one of them asks the other: “When the hell did they start burying two people in We hear Kenny Shiels is taking his Ballymena players to Blackpool in the summer – apparently they wanted to know what it was like to ride on an open-top bus!?! They say that hooliganism and sectarianism are bad, but personally – I think Chris Walker is the totally unacceptable face of PDF created with pdfFactory trial version

OFFICE OF THE IG (MEDICAL)/ MEDICAL SUPERINTENDENT COMPOSITE HOSPITAL No. M.III-52 /2013-14-CH-MSK Dated: - 06/ 05 / 2013 We are interested in the purchase of the stores as enumerated below. In case you are in a position to supply, please forward your Sealed Quotations to the undersigned before the stipulated date as under. The price quoted should be on firm basis and including all delivery ch